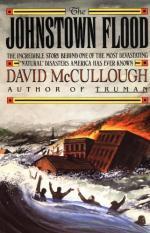 David McCullough
This Study Guide consists of approximately 63 pages of chapter summaries, quotes, character analysis, themes, and more - everything you need to sharpen your knowledge of The Johnstown Flood.

This detailed literature summary also contains Topics for Discussion and a Free Quiz on The Johnstown Flood by David McCullough.

The Johnstown Flood describes how on May 31, 1889, the earthen dam holding back Lake Conemaugh 15 miles upriver from Johnstown, PA, gives way in abnormally heavy spring rains, and a wall of water races down the valley, scraping away all trace of several small communities before destroying and drowning the populace of Johnstown in ten minutes. Relief operations begin immediately, involving the American Red Cross, and locals try unsuccessfully to blame a club of rich Pittsburghers who own the dam and lake. Most surviving Johnstownians return to rebuild their city and forget the terrible disaster.

Above Johnstown on Memorial Day, employees of the South Fork Fishing and Hunting Club prepare for the season under abnormally bad weather. Johnstown, PA, has an ethnically diverse population of 10,000, boasts modern amenities, and its working class population enjoys a good life, menaced by the threat of flooding should the 72-foot high South Fork dam, a mound of overgrown rubble 15 miles upriver, break and allow 20 million tons or water to rush down the valley. The club's fancy facilities are resented - and exaggerated - by locals. The lake begins decades earlier as part of the state's canal system, is owned briefly by the Pennsylvania Railroad, and stands in partial ruins until Benjamin F. Ruff and fifteen wealthy Pittsburgh friends buy it for a summer retreat. Ruff repairs the dam on the cheap and ignores warnings of catastrophe to the steel town in which the Cambria Iron Company has invested some $50 million.

By dawn on May 31, 1889, water stands 2-10 feet deep in Johnstown and is rising fast. Men are working feverishly to shore up the dam, deepen its spillway, and remove debris but by 11 AM, begin sending warnings, which are ignored. When the dam gives way, the lake empties swiftly, the torrent picks up natural and manmade debris, and stands 70-75 feet high when it hits and demolishes its first major obstacle, a massive stone viaduct. Mineral Point is shaved to bare rock. A railroad engineer runs ahead of the wave the last half-mile to the Conemaugh yards and his open whistle provides a brief warning, but passengers on the stranded Day Express suffer fatalities.

Woodvale is next stripped of all traces of human habitation, before Johnstown is hit without warning at 4:07 PM. Within ten minutes, it is drowned and destroyed. Houses and rooftops with people clinging atop spin off and most pile into the stone bridge, which withstands the impact, grows clogged with oil soaked debris, and catches fire. Spotty word reaches Pittsburgh, and both railroad magnate Robert Pitcairn and the newspapers head for Johnstown, but get no further than Bolivar, where bodies are being recovered, suggesting "hundreds if not thousands" have been killed in "an appalling catastrophe." At the risk of their own lives, rescue parties in Johnstown clamber through rubble searching for signs of life.

After a night of hideous sounds, June 1, 1889, dawns eerily quiet as crowds of cold, nearly naked, hungry people, many badly injured, gather in clumps, trying to understand. By noon, people are coming in from outlying areas bearing supplies and caring for children. Newspapermen straggle in and begin filing major stories. An organizational meeting is called and committees set up to deal with the first aid, provisions, sanitation, and security. No final body count is ever made, but the accepted figure is 2,209. Hundred of bodies are never found. The first relief trains get through bearing bread, cheese, and crackers, collected throughout Pittsburgh after a 1 PM mass meeting and the collection of donations city wide. The "Pittsburgh Relief Committee" and Daniel Hartman Hastings, Pennsylvania's Adjutant General, arrive to help. Clara Barton leads a delegation of 50 doctors and nurses from the American Red Cross, which directs hundreds of volunteers distributing a half million dollars' worth of blankets, clothing, food, and cash. On Sunday, June 9, the sun shines over a religious service at which the Cambria Iron Company's John Fulton stirs the crowd with a call to rebuild bigger and better than ever.

Deep-seated resentment against the South Fork Fishing and Hunting Club surfaces and is trotted out before the press and coroners. Wealth, not technology, becomes the target of the press as papers editorialize the club is criminally guilty. Clubmen donate to the relief fund, but this helps little. Lawsuits are filed but not a nickel is ever collected, as the club has no assets and its lawyers argue "Act of God." Johnstown business people want simply to forget the disaster. Grandview Cemetery is dedicated, May 31, 1892, with a granite monument inscribed to the "Unknown Dead," behind which are arranged 777 small white marble headstones.

More summaries and resources for teaching or studying The Johnstown Flood.