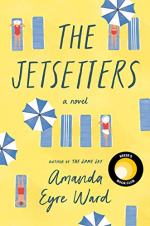 Amanda Eyre Ward
This Study Guide consists of approximately 37 pages of chapter summaries, quotes, character analysis, themes, and more - everything you need to sharpen your knowledge of The Jetsetters.

Much of the novel takes place on the Splendido Marveloso, which is the cruise ship that Charlotte boards with Cord, Lee, and Regan. (Regan is joined by Matt, who leaves partway through the trip after confessing that he has been having an affair.) Charlotte hopes that the trip will help her reconnect with her children, from whom she has grown somewhat estranged. After several instances of tensions and dysfunction, the family members are eventually able to recommit to loving each other. Charlotte also makes a romantic connection on the boat when she meets a handsome elderly porter named Paros.

Charlotte lives in the city of Savannah, Georgia, which is also where she raised her children. At the beginning of the main narrative, she is a widower, she is somewhat estranged from her children, and he best friend Minnie recently died. Her only remaining source...

More summaries and resources for teaching or studying The Jetsetters.

The Jetsetters from BookRags. (c)2022 BookRags, Inc. All rights reserved.