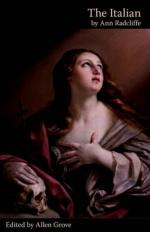 The Italian, or, the Confessional of the Black Penitents Summary & Study Guide

Ann Radcliffe
This Study Guide consists of approximately 38 pages of chapter summaries, quotes, character analysis, themes, and more - everything you need to sharpen your knowledge of The Italian, or, the Confessional of the Black Penitents.

The Italian, or, the Confessional of the Black Penitents Summary & Study Guide Description

The Italian, or, the Confessional of the Black Penitents Summary & Study Guide includes comprehensive information and analysis to help you understand the book. This study guide contains the following sections:

This detailed literature summary also contains Topics for Discussion and a Free Quiz on The Italian, or, the Confessional of the Black Penitents by Ann Radcliffe.

"The Italian" by Ann Radcliffe is a classic gothic novel, renowned throughout history. The protagonist, Vivaldi, falls in love and plans to marry Ellena, a young woman with a secret family history, against his family's wishes. His mother and Schedoni conspire to separate them by kidnapping and imprisoning Vivaldi. Eventually, Ellena's family history is revealed, allowing her to be acknowledged as a suitable match for Vivaldi. "The Italian" is a tale of secrecy and intrigue that incorporates seemingly supernatural events to explain a very complicated plot.

The story opens with an Italian priest offering to allow an English traveler to read a strange narrative in which the story of Vivaldi and Ellena is relayed. Vivaldi meets and falls in love with Ellena, but their nuptials are delayed by the death of Signora Bianchi, Ellena's aunt. Additionally, Vivaldi's parents disapprove of the match, and Marchesa di Vivaldi and Scheoni, a priest, plot to separate the young lovers. Ellena is kidnapped and taken to the convent at San Stefano where the abbess treats her cruelly and she is befriended by Sister Olivia. With Olivia's help, Vivaldi rescues Ellena, and they travel to Lake Celano with the intent to marry.

During the ceremony, Vivaldi is imprisoned by the Inquisition, and Ellena is kidnapped again. Ellena is imprisoned in a house on the beach by Spalatro who intends to murder her on Schedoni's orders. When Spalatro objects to killing Ellena, Schedoni plans to commit the deed but is prevented by recognizing Ellena as his daughter. Schedoni takes Ellena to the convent of Santa Maria della Pieta where she learns that Olivia is her mother and Schedoni is her uncle.

Schedoni travels to Rome to obtain Vivaldi's release from prison. On her deathbed, Marchesa di Vivaldi repents of her schemes against Vivaldi and Ellena and decides to promote the marriage through a deathbed promise from her husband to allow Vivaldi to marry Ellena. Paulo escapes from the prison of the Inquisition and returns to Naples to advise Marchese di Vivaldi of his son's circumstances. Meanwhile, at the prison of the Inquisition, a mysterious monk urges Vivaldi to summon Schedoni and Father Ansaldo, resulting in the revelation of Schedoni's past crimes as the Count di Bruno.

Vivaldi is released from prison, and when the Marchese offers Paulo his freedom as a reward for his services to Vivaldi, Paulo refuses, choosing instead to continue serving Vivaldi. Vivaldi visits Ellena at the convent of Santa Maria della Pieta where he learns that Olivia is her mother and Schedoni is not her father. After verifying Ellena's parentage, the Marchese approves of his son's choice, and Vivaldi and Ellena are married happily. The Marchese holds a festival several months later to celebrate their nuptials.

More summaries and resources for teaching or studying The Italian, or, the Confessional of the Black Penitents.

The Italian, or, the Confessional of the Black Penitents from BookRags. (c)2022 BookRags, Inc. All rights reserved.