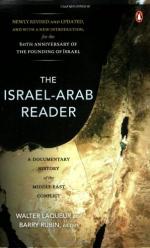 Walter Lacquer and Barry Rubin
This Study Guide consists of approximately 28 pages of chapter summaries, quotes, character analysis, themes, and more - everything you need to sharpen your knowledge of The Israel-Arab Reader.

The Israel-Arab Reader: A Documentary History of the Middle East Conflict Summary & Study Guide includes comprehensive information and analysis to help you understand the book. This study guide contains the following sections:

This detailed literature summary also contains Topics for Discussion and a Free Quiz on The Israel-Arab Reader: A Documentary History of the Middle East Conflict by Walter Lacquer and Barry Rubin.

The Israeli-Arab Reader provides a comprehensive examination of the conflict between the Arabs and the Israelis. The examination begins at the beginning with the early days of the Zionist movement and the call for the creation of the State of Israel in the early 1900s. At this time, movements of nationalism are beginning among both the Arabs and Jews. For centuries, the Jewish saying is "Next year in Jerusalem" for they are a people who have no country. Some Jews immigrate to Palestine.

The area of Palestine is under British control at the time and the movement for a Jewish homeland leads to the Balfour Declaration of 1917 which calls for the establishment of a Jewish homeland at some point in the future. The idea does not have the support of the Arab nations and the issue is debated for years. In 1920, the British receive a mandate from the League of Nations to administer the area and to secure the conditions for a Jewish homeland. The mandate continues under the United Nations until partition occurs on May 14, 1948 and Israel becomes an independent state.

The immediate result of partition is invasion by the other Arab countries and a war which Israel wins. This is the beginning of numerous wars and conflicts between the two groups of people. The creation of Israel results in the exodus of many Palestinians who reside in refuge camps in the surrounding Arab countries. The conflicts and acts of terrorism continue with the Arab nations refusing to recognize Israel and demanding a homeland for the Palestinian people.

The first Arab leader to negotiate a peace with the Israelis is Egyptian President Anwar Sadat in 1973. Sadat and Egypt basically become outcasts in the Arab world but Sadat's talks with the Israelis eventually lead to the Camp David accords and eventually the Israel-Egypt Peace Treaty. This begins the long slow process that leads to the Madrid Peace Conference in 1991 which involves the Palestine Liberation Organization (PLO) in negotiations with Israel. This leads to future agreements between Israel and the PLO and other Arab states and autonomy for the people of Palestine.

The editors of the Israel-Arab Reader provide the speeches, letters, correspondence and report of the various entities involved from the late 1800s through the 1990s. The reader can read the original documents instead of reading about them and can draw their own conclusions. The entities involved are most of the Arab, Israeli, Palestinian, Russian and American leaders of the time with the excerpts presented in chronological order. The book is lengthy but very interesting and worthwhile reading.

More summaries and resources for teaching or studying The Israel-Arab Reader: A Documentary History of the Middle East Conflict.

The Israel-Arab Reader: A Documentary History of the Middle East Conflict from BookRags. (c)2022 BookRags, Inc. All rights reserved.