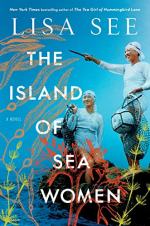 Related Topics
Dragon Bones: A Novel
Dreams of Joy: A Novel
Snow Flower and the Secret Fan
The Tea Girl of Hummingbird Lane
On Gold Mountain

Lisa See
This Study Guide consists of approximately 58 pages of chapter summaries, quotes, character analysis, themes, and more - everything you need to sharpen your knowledge of The Island of Sea Women.

The Island of Sea Women Summary & Study Guide includes comprehensive information and analysis to help you understand the book. This study guide contains the following sections:

This detailed literature summary also contains Quotes and a Free Quiz on The Island of Sea Women by Lisa See.

The following version of this book was used to create the guide: See, Lisa. The Island of Sea Women. Scribner, 2019.

The Island of Sea Women is the story of the friendship of two haenyeo, Korean sea divers on Jeju Island. The story begins in the present, when Young-sook, an old, retired haenyeo, is approached by a woman named Janet, and her daughter, Clara, on the beach. When the woman shows Young-sook a picture of a young woman in a bathing costume, Young-sook denies knowing the woman, but she does in fact recognize her as her longtime best friend, Mi-ja, with whom she had a falling out decades earlier.

The story flashes back and traces the beginnings of the friendship between Young-sook, who is the daughter of the leader of the Sut-dong diving collective, and Mi-ja, an orphan girl. The two girls learn to dive together and work side-by-side in the fields with Young-sook’s mother, Sun-sil, until, one day diving, Sun-sil drowns. From that day forward Mi-ja and Young-sook are inseparable. Throughout their developing friendship their island is occupied by the Japanese, and the situation worsens during World War II, at which time the young women decide to leave Jeju Island to do leaving home water work in Vladistock. While working in Vladistock, the girls save money and purchase presents for their future husbands.

When Young-sook and Mi-ja return to Jeju Island, they see that the atmosphere has changed dramatically from the presence of war. At this time, the young women marry. Mi-ja marries Sangnum, a worker for the Japanese food stores, while Young-sook marries Jun-bu, a teacher. The women bear children, but the truth emerges that Mi-ja suffers at the hands of her husband. As their children grow older and when the war ends, Jeju Island is thrust into political turmoil when the islanders rebel against the police force. The uprising occurs because the islanders want the right to elect their own leaders. During the uprising, Young-sook and Mi-ja find themselves on different sides because of their husbands’ connections. Mi-ja’s husband is connected to the police force and the foreign-backed dictator, while Young-sook’s husband is a teacher and supports the idea of a democratically elected leader. On the day of a bloody massacre, known as the Bukchon massacre, Mi-ja and Young-sook find themselves at the mercy of the police, who are torturing islanders and trying to extort confessions from them. Because Mi-ja’s husband is connected to the police force, Mi-ja is spared. She initially tells Young-sook that she will have her husband save Young-sook and her family, but then she fails to do so, and Young-sook witnesses her husband, sister-in-law, and son brutally murdered.

For years, even after the uprising ends, Young-sook is not able to forgive Mi-ja for what she perceives is an unpardonable betrayal. Mi-ja lives a distance from Young-sook’s home, but she appears from time-to-time in Young-sook’s village. One day, Young-sook discovers that her daughter, Joon-lee, has been riding Mi-ja’s son, Yo-chan’s, bicycle. Years later, Joon-lee comes home from college and announces that she is marrying Yo-chan. Young-sook meets Mi-ja face-to-face to discuss the engagement, but Young-sook refuses to give her blessing. The wedding takes place anyway, and Young-sook does not attend.

Years pass. Mi-ja is now living in America, but she regularly sends rubbings to Young-sook. These are creations she and Young-sook made together as girls. Young-sook, however, refuses to open the letters. Young-sook is in her old age now and has retired from diving. She spends her days at the beach, collecting algae and thinking of the friend she lost. The day after she is approached by Janet and Clara on the beach, she goes to the Peace Park and attends a memorial, a ceremony for all who died in the Jeju uprising. There, Young-sook sees Clara, who she knows now is Mi-ja’s great granddaughter. Clara makes Young-sook listen to a taped recording interview with Mi-ja in which Mi-ja describes her side of the story, how her husband raped and beat her, and how she thought of Young-sook every day and regretted not saving her or her family. Mi-ja also explains that the reason she did not save Young-sook’s son is because she knew that if she had brought him into her home, her husband would have beaten the boy. Hearing Mi-ja’s voice telling her side of the story facilitates Young-sook’s forgiveness, and her good memories of her times with her friend all come rushing back to her. The novel ends with Clara asking Young-sook to take her and her mother diving. The novel ends with Young-sook taking three deep breaths, getting ready to dive with Clara.

More summaries and resources for teaching or studying The Island of Sea Women.

The Island of Sea Women from BookRags. (c)2022 BookRags, Inc. All rights reserved.