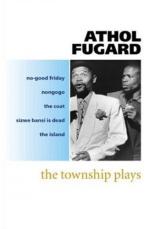 This Study Guide consists of approximately 57 pages of chapter summaries, quotes, character analysis, themes, and more - everything you need to sharpen your knowledge of The Island, by Athol Fugard.

The Island, by Athol Fugard Summary & Study Guide includes comprehensive information and analysis to help you understand the book. This study guide contains the following sections:

This detailed literature summary also contains Quotes and a Free Quiz on The Island, by Athol Fugard by .

The play is one of several written by Fugard as part of his ongoing anti-racist activism in South Africa, in Africa in general, and around the world.

The play is divided into four scenes. Scene One begins with a prologue-like sequence in which central characters John and Winston enact the various torture-like circumstances in which they find themselves. Then, without a break in the action, the characters are returned to their shared cell, where they tend to each other’s injuries and try to encourage each other to forget about the suffering they experienced that day.

As part of his efforts to distract Winston from his suffering, John tries to get him engaged in their preparations for a performance of the play Antigone that they are offering to the guards and to the other prisoners. Winston does not seem too interested, but John keeps pressing him, asking for his help in constructing a necklace out of used nails for the play’s central character, the princess Antigone, to wear. Their conversation also references the play’s subject matter - Antigone’s struggle against the autocratic power of the State, as represented by her uncle, Creon. John also urges Winston to be more agreeable in his behavior towards the guards. Finally, he engages Winston in a game that they seem to play often, leading each other through imagined stories that remind them of their lives outside prison.

In Scene Two, Winston takes steps in the direction of committing to the Antigone performance, but becomes upset when John laughs at him in his costume. John’s attempts to convince him to get back to the preparations are interrupted by the arrival of a guard, who takes John out of the cell. Alone, Winston muses on his discomfort with the whole Antigone experience, and resolves to tell John again that he will not do it. When John returns, Winston starts to have that conversation, but is interrupted when John tells him that he has been told his sentence has been shortened. The two men celebrate John’s impending freedom, but John cuts the celebration short out of fear that the whole thing might be a trap.

Scene Three is set later that same night. John lies awake counting the days until his release. Winston leads John through an imagining of his return home that is at first a happy story, but then becomes darker and more intense. When John cries out for him to stop, Winston explains that he is afraid of being left alone, and of losing his sense of self and of purpose when John leaves. After a short passage of time, John asks Winston if he remembers his lines for the play. Winston says yes, and they get ready to do the performance of Antigone.

Scene Four is set on the day of the performance. John speaks to the audience, which consists of guards, other authorities, and fellow inmates. He sums up events in the lives of the characters before the play began, and then speaks the play’s first words – those of Creon, the voice of the State whose authority has been challenged by the princess Antigone. Winston then appears, wearing the necklace of nails and dressed in what passes for a costume. Creon (John) and Antigone (Winston) argue over whether Antigone has the right to defy the state. As their argument intensifies, Winston rips off his wig and accepts her punishment, having “honoured those things to which honour belongs” (227).

The play ends with a series of images that echo the circumstances of imprisonment and repression with which the play began.

The Island, by Athol Fugard from BookRags. (c)2022 BookRags, Inc. All rights reserved.