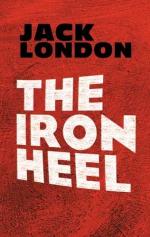 Jack London
This Study Guide consists of approximately 37 pages of chapter summaries, quotes, character analysis, themes, and more - everything you need to sharpen your knowledge of The Iron Heel.

This detailed literature summary also contains Topics for Discussion and a Free Quiz on The Iron Heel by Jack London.

Written in the early years of the twentieth century, The Iron Heel takes certain circumstances of the time, anchored in the tension between socialism and capitalism, and posits a two tiered future - a more immediate future of socialist revolution, and a centuries-distant, near-Utopian future in which that revolution has finally succeeded. In addition to exploring themes relating to the aforementioned tension, the book also explores the universality of human existence and one of that universality's manifestations - the belief in, and clinging to, self-righteousness as a form of self-preservation.

The novel begins with a forward from a twenty-seventh century academic named Anthony Meredith. He writes that the document about to be read (which he calls The Everhard Manuscript) is, while an accurate representation of the socio-political-economic situation of the time, something less than fully accurate when it comes to its portrayal of its central character, socialist revolutionary Ernest Everhard. Meredith suggests that the manuscript's author, Everhard's wife Avis, was influenced both by her personal adoration of her husband and her ideological adoration of/adherence to his beliefs - in other words, Meredith, writes, the document is as much a canonization as it is a report.

The document itself, written by Avis in first person narration and footnoted from a twenty-seventh century perspective (possibly by Meredith), begins in the aftermath of Everhard's recent death and the slightly less recent failure at the first attempted worker's revolution. Avis describes her first meetings with Everhard, during which she initially found his personal appearance and self-righteousness offensive. Later, she writes, after investigating one of the cases of capitalist indifference to the workers who sustain the system, she begins to see his point, finds him more attractive, and becomes more deeply involved with him both personally and ideologically. At the same time, Avis writes, both her father (scientist Dr. Cunningham) and a family friend (Bishop Morehouse) also begin to see the value of Everhard's arguments and begin to change their behavior.

As Avis, her father and Morehouse become more and more deeply involved in the socialist revolution, and as Avis becomes more emotionally involved with Everhard, the Oligarchy (the name given to the capitalistically self-interested coalition of bankers, industrialists and politicians) become more intensely involved in the process of keeping the Revolution at bay. For several chapters, the tension between the opposing forces builds, with both large and small scale effects on Avis, Everhard, and the others. Cunningham is forced out of his home and his university position, Morehouse is declared insane (but escapes from the asylum in which he is imprisoned), and Everhard, after being elected to Congress, is framed for a bombing attempt and sent to prison. Avis is also jailed, but is released after six months without ever being charged. She immediately goes into hiding and is joined some time later by the released Everhard. Together, and in association with other members of the revolution, they plot the next stage of their revolutionary activities.

Before the planned actions can take place, however, the Oligarchy, whose attitude of destruction towards the revolution is labeled by Everhard as the "Iron Heel", stages a preemptive strike in Chicago, triggering a riot that is forcibly and violently put down by mercenaries and other military forces employed and directed by the Oligarchy. Avis and Everhard are both present at the riot and are witness to the destruction of thousands of lives, including that of the now destitute Bishop Morehouse, at the hands of the Oligarchy. Dr. Cunningham has disappeared.

In the manuscript's final chapter, Avis writes of plans for rebuilding the revolution and trying again, but before those plans can be explained the manuscript abruptly ends. A footnote, written perhaps by Meredith, suggests that Avis, in the middle of writing, learned she was about to be arrested, hid the manuscript, and disappeared. The manuscript stayed hidden, the footnote continues, for several centuries and doesn't resolve the long unsolved question of how, exactly, Ernest Everhard died.

More summaries and resources for teaching or studying The Iron Heel.