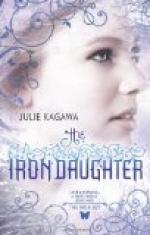 Julie Kagawa
This Study Guide consists of approximately 55 pages of chapter summaries, quotes, character analysis, themes, and more - everything you need to sharpen your knowledge of The Iron Daughter.

This detailed literature summary also contains Topics for Discussion on The Iron Daughter by Julie Kagawa.

The Iron Daughter is the second novel in the Iron Fey series. In the first novel, The Iron King, Meghan Chase of Louisiana learns that she is half faery, the daughter of Oberon, the Summer King. Meghan has to kill Machina, the Iron King, in order to rescue her younger brother, Ethan. Along the way she meets and falls in love with Ash, a Winter Prince. In exchange for Ash's help, Meghan promises to return with him to the Winter Court.

As The Iron Daughter begins, Meghan is being held by Mab, the Winter Queen. Mab is the mother of Ash. Unbeknownst to Meghan, Mab has locked away Meghan's glamour, or magic. Meghan is upset because Ash seems indifferent to her now. She does not understand that love between Summer and Winter fey is forbidden in the world of Faery. Mab accuses Meghan of nearly killing Ash, by binding him to a contract in the Iron realm. Iron is poison to fey. Meghan apologizes and explains that she killed Machina, but Mab is not impressed. Later Prince Rowan, Ash's brother, tricks Meghan into confessing her love for Ash by giving her a spill-your-guts apple. Ash rescues Meghan from Rowan, but he says he would never touch the half-breed daughter of Oberon. Meghan collapses from cold, nausea, and heartbreak.

Oberon arrives in the Winter Court to deliver the Scepter of the Seasons. The scepter is exchanged between Summer and Winter twice a year, at equinox, to keep the seasons in balance. Oberon tries to take Meghan back with him to the Summer Court, but he cannot because Meghan is bound by the promise she had made to Ash.

Iron fey sneak into the Winter palace to steal the Scepter of the Seasons. Ash's older brother, Prince Sage, is killed. Meghan witnesses the crimes. No one believes Meghan when she incriminates the Iron fey, and Mab freezes her as a statue. Ash rescues her. He explains that he still loves Meghan, but their love is forbidden because they are from different kingdoms. Ash and Meghan escape from the Winter Kingdom.

A goblin agrees to help Ash and Meghan escape, but then he betrays them to Rowan's Thornguards. Rowan has aligned himself with the Iron kingdom, dazzled by their promise of power. The Thornguards wear iron rings, believing those rings will help them learn to live with and control iron, but in reality the rings are slowly killing them. Meghan and Ash escape, with help from Meghan's new-found Iron glamour, only to be chased by other spiderlike Iron fey to a lodge. Ash fights the spidery creatures as best he can, then Meghan's old friend, Puck, arrives to help. Puck is from the Summer Court, and he also loves Meghan. After Ash and Puck defeat the Iron fey, the two agree that Meghan should go back to Oberon's kingdom. Meghan disagrees. She wants to stay with Ash, and she wants to help find the scepter. The next morning, however, Ash is gone.

The Iron fey has stolen the scepter from Winter, creating the impression that Summer had taken it, in order to make Winter and Summer go to war. After the kingdoms are weakened, the Iron King plans to invade and take over the Nevernever.

Puck tries to convince Meghan that the world of Faery will survive, with or without her help, and that she should return to her family in the mortal realm. Meghan is suddenly caused to move, against her will, dragged through the woods and scratched by brambles. Puck realizes it is a Summoning. Grimalkin the cat is calling in a promise Meghan had made long ago, to help Ironhorse. Ironhorse had been Meghan's enemy in the past, because Meghan killed his king, Machina, but Ironhorse thinks the new Iron King is a fraud. Ironhorse knows that the scepter has been hidden in the mortal realm, in Silicon Valley.

Meghan, Puck, Grimalkin, and Ironhorse enter the Briars to find a trod to Silicon Valley, but they find themselves in the Between, the kingdom ruled by Leanansidhe, the Dark Muse. Leanansidhe wants to help Meghan find the scepter, because she knows that if Summer and Winter are destroyed, her kingdom will also be lost. Leanansidhe's informants learn that the scepter is being held at SciCorp, a software corporation in San Jose.

Meghan, Puck, Ironhorse, and Grimalkin make their way to SciCorp, where Virus, a former lieutenant of Machina, has the Scepter of the Seasons. Ash had tried to take the scepter from Virus earlier, and now he is under her control, with a bug implanted at the base of his skull. Virus orders Ash to kill Meghan and the others. They run, only to encounter Thornguards in the hallway. Grimalkin helps them find another exit. Ironhorse bulldozes the way through cubicles filled with drones. Ash slashes at Meghan's arm, but Meghan sees torment in his eyes. Ironhorse is wounded while trying to protect Meghan.

Back at Leanansidhe's mansion, Puck explains that Ash is dying from the bug implanted in him. Virus sends a message that the scepter has been moved to a new location and Ash has been ordered to kill Meghan's mortal family in Louisiana. Meghan and Puck agree that they will try to help Ash, but they will kill him if necessary in order to save Meghan's family. Meghan and Puck use a trod to reach Meghan's house quickly, arriving in her brother's bedroom closet. Ash is already in the house, having frozen the interior. Meghan finds her little brother shivering under his bed. Meghan and Puck head downstairs to find her parents frozen on their sofa. Ash is there. He asks them to kill him. Puck and Ash battle. Meghan sees something glitter on the back of Ash's neck. Puck wounds Ash, but not fatally, and Meghan uses her Iron glamour to make the bug release its hold on Ash.

Meghan, Ash, and Puck travel to find a healer, to save Ash from extreme iron poisoning. The gnome healer turns out to be the school nurse from Meghan's old high school. She, along with Puck, had been assigned by Oberon to look out for Meghan in the mortal realm, back in the days when Meghan had no knowledge of the Faery world. The healer says Ash should return to the Winter Court to heal with the help of Winter glamour. However, that is not possible. As an alternative, they decide to go to the Winter Formal at Meghan's old high school, because the abundance of teenage angst there might create enough glamour to help Ash.

After the dance, it is snowing in Louisiana. This is proof that the scepter must be found and returned, to restore the balance of the seasons.

Virus has taken the scepter to another SciCorp building, a factory. Meghan, Ash, Puck, Grimalkin, and Ironhorse take a window cleaner's platform to the roof of the factory and look through the skylights, to see Virus giving a speech below. Ironhorse dives through the skylight and begins battle. Virus is shocked to see Meghan using Iron glamour to wave away some arrows. Virus and Meghan have a battle of wills, fighting to control a swarm of bugs. Ash attacks Virus, slicing her in two. The bugs she controlled rain to the floor. Ash retrieves the scepter. Ironhorse dies in the battle, having protected Meghan until the end.

Ash uses the scepter to create a trod to the Reaping Fields, where the battle between Winter and Summer is being fought. Rowan is there, and he tries to take the scepter. Meghan rides away with the scepter on a unicorn, but the unicorn is killed in the middle of the battlefield. Meghan raises the scepter. Suddenly the glamour locked within her releases. It ripples across the battlefield. Meghan asks for Mab, then tries to explain everything that has happened. Ash and Puck confirm Meghan's story, but Mab refuses to believe the plot concocted by the Iron fey until she sees the iron ring on the withered hand of one of Rowan's Thornguards. Meghan gives the scepter to Mab.

Mab forces Ash to choose between his old life in the Winter Court or Meghan. He chooses Meghan and is banned from the Nevernever forever. Ash steps through a gateway into the mortal realm. Oberon forces Meghan to choose as well, and she follows Ash through the gateway. The two embrace in the rain, not sure what they will do next, but ready to face the future together.

More summaries and resources for teaching or studying The Iron Daughter.

The Iron Daughter from Gale. ©2005-2006 Thomson Gale, a part of the Thomson Corporation. All rights reserved.