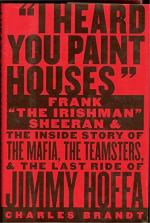 Brandt, Charles
This Study Guide consists of approximately 30 pages of chapter summaries, quotes, character analysis, themes, and more - everything you need to sharpen your knowledge of The Irishman.

The Irishman Summary & Study Guide includes comprehensive information and analysis to help you understand the book. This study guide contains the following sections:

This detailed literature summary also contains Topics for Discussion on The Irishman by Brandt, Charles.

In The Irishman: Frank Sheeran’s True Crime Story by Daniel Brand, Brand retells the life story of Sheeran, the mafia member known to be a member of Jimmy Hoffa’s inner circle. The story was told to Sheeran’s lawyer just before Sheeran’s death. The story describes Sheeran’s childhood as the son of an abusive father as well as Sheeran's career in the military during World War II. Sheeran indicates that he was involved in high profile crimes like supplying weapons to Cubans for the Bay of Pigs Invasion, working as a hit man for Russell Bufalino, and murdering Joe Gallo. Additionally, Sheeran claims to be responsible for the murder of Jimmy Hoffa.

Brand tells most of Sheeran’s story in chronological order. He breaks this format only in the beginning of the book when he first writes about the conditions at Dachau, a concentration camp that Sheeran and his unit in the Army were responsible for liberating. Brand does this to indicate that this was a defining experience for Sheeran. Brand moves back in time to describe how Sheeran’s father was not only abusive to Sheeran but also used him in petty crime scams. Sheeran ran away from home when he was only in the ninth grade and worked odd jobs until he joined the Army.

After Sheeran returned home from the Army, he suffered from PTSD. Since his illness was not diagnosed, he self-medicated with red wine. He met, Mary Leddy, the woman who would become his wife at a carnival and married her even though her parents did not like him. Sheeran got a union job driving a meat truck for a supermarket chain. He supplemented his income by pilfering meat from the shipments and selling it on the side. Sheeran was suspected of stealing, but the thefts could not be proved. He was offered money to name any other workers who were stealing meat, but he refused to do so. Meanwhile, Sheeran had been making friends with people he met at the Friendly Lounge. Sheeran was already working as Russell Bufalino’s driver and hit man for his loan shark business before he realized that Bufalino was a member of the mafia. It was Bufalino who introduced Sheeran to Hoffa.

During Sheeran’s first conversation with Hoffa, Hoffa asked Sheeran if he painted houses, mafia code for contract killings. Sheeran acted as a hit man as needed for Hoffa and his Teamsters’ Union. Among other jobs he did for the mafia, Sheeran describes being called to transport a load of military guns, ammunition, and uniforms from Baltimore to Jacksonville, Florida. He said the equipment was for anti-Castro Cubans to use during the Bay of Pigs Invasion.

Sheeran takes credit for killing Joe “Crazy Joe” Gallo, a member of the mafia who was so disliked by other members of the group that they called upon one of their own to kill him. Perhaps, most surprising is Sheeran’s claim that he killed Hoffa. Brand points out discrepancies with both of these claims.

More summaries and resources for teaching or studying The Irishman.

The Irishman from BookRags. (c)2022 BookRags, Inc. All rights reserved.