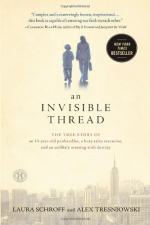 This detailed literature summary also contains Quotes and a Free Quiz on An Invisible Thread by Alex Tresniowski and Laura Schroff.

An Invisible Thread, The True Story of an 11-Year-Old Panhandler, a Busy Sales Executive, and an Unlikely Meeting With Destiny, by Laura L. Schroff, and Alex Tresniowski, tells the true story of an unlikely friendship that had ramifications that neither could have foreseen.

The reader is introduced to a young poor boy by the name of Maurice. He is begging for change on the street when a young business woman walks past him. Like most of the people that he approaches, she brushes past him as if he doesn't exist. Then, inexplicably, for some reason, she turns back toward him. She asks him if he's hunger. He is. She asks him if he wants to go across the street to the McDonald's for a hamburger. He does.

Laura learns that the boy's name is Maurice, that he lives in the projects not a block from her own high rise luxury apartment building. She gives him her business card and tells him to call her if he needs help or anything. Then she gives him some spare change and walks away. The boy, unknown to Laura, tosses her card in the garbage.

A couple of days pass and Laura can't get the boy out of her mind. What was he doing? Was he still hungry? Why wasn't he in school? Deciding that the boy might never call her, she decides to try and find him, herself. She doesn't have to look hard as he's back on the same street corner as before. He agrees to go get another hamburger. Laura notes that this time he doesn't bolt his food down like last time. Thus, begins a Monday only routine of getting a meal together.

After a few weeks, Laura suggests that they go to a nicer place to eat. She doesn't stop to think that he might not have anything to wear, or have the means to clean himself up. Still, he does the best that he can, and they eat at the Hard Rock Cafe. She notices that he only eats part of it, and when she asks if he's still hungry he says that he is, but that he wants to take the food back for his mother and grandmother. Laura is moved by his kind heart, and she tells him that he should go ahead and eat all he wants, that she will order a couple of meals when they leave so he can take his family some food back.

Meanwhile, Laura's co-workers are worried about her involvement with this street boy. They are worried that it might be perceived as something inappropriate. Laura assures them that everything is completely appropriate and that the boy has never tried to hustle her or place her in a dangerous situation. They urge her to just give him money and walk away, but she refuses to do so.

The reader learns that both Maurice and Laura have some things in common. Both of them have had bad and abusive fathers in their lives. Laura's father terrorized she and her four siblings until they left home. Maurice's father had been a drug dealer, and had routinely beat up on his mother. Finally, he left and never came back.

She asks how he eats when he isn't eating with her and is astounded to learn that he knows when the free charity meals are served at the mission, and he gets free breakfast at school. Other times, he panhandles for enough change to get a meal. Laura tells him that she will make him a lunch to take to school and he asks if she can put it in a brown bag like the other kids do. He tells her that it lets them know that he has someone that cares for him. He asks her if she will go with him to the Parent Teacher Openhouse the next evening, and she agrees.

When she meets Maurice's teacher, Kim, she learns more about Maurice. She finds out that while Maurice is intelligent, he misses a lot of school, and because his hygiene isn't great, the other kids pick on him, which results in a lot of fights. Kim urges her, that if she's going to be in his life, to take it seriously because he's been disappointed by too many people coming into and going out of his life. Laura assures him she's in it for the long haul.

When they return to the apartment, Laura scolds Maurice for skipping school or coming in late. He breaks into tears and Laura learns that he misses school a lot because he doesn't have a watch or a clock. They make a detour to the store where Laura buys him both items. Maurice begins going to school on time and making better grades. Because she's started doing his laundry for him, and giving him second hand clothes from some of her friends (who had children his age), he's not picked on by the other children.

She wants to take him to a Mets game, but feels as if she should get permission from his guardians. She sends a permission slip with him to have his mother sign it. He never returns it, so Laura takes her friend Lisa, and they go into the projects. They both realize that they are in a part of the city and viewing a reality that they did not even know existed. Maurice's grandmother signs it as Darcella, Maurice's mother is too strung out on drugs to sign. Rose, the grandmother, says that Maurice has told them all about her and they are grateful for her involvement.

A long series of new adventures take place for both Laura and Maurice. Laura takes Maurice to her sister's house in the country and he is awestruck by the space and the fact that each child has his or her own room. The reader also learns more about Maurice's father, as well as Laura's father. Maurice's father had met his mother in a gang, and they'd lived hard and fast, high and drunk for most of their early married lives. When the children were born, Morris, the father, was done with domestic life and left. Laura tells of many occasions of finding her mother beaten bloody, or her brothers, and being told that they shouldn't tell anyone about it. They suffered in silence for decades.

Laura tells Maurice that she'd like to take him to her sister's house in the country for Christmas if it would be okay with his family. He laughs and tells her that in the projects they know what Christmas is, but none of them ever celebrate it or expect it will happen to them. This makes Laura extremely sad and she tells him to make his first ever Christmas list. He tells her that the year before he'd gone to the Salvation Army Christmas program and he'd been allowed to pick a gift from under the tree. It was a white stuffed teddy bear. The Christmas that he spends with Laura and her sister and their family in the country is the best Christmas he's ever had, and he tells her so. He also tells her that he's gotten her a present. Surprised, she opens up the gift to find the white stuffed teddy bear. She understands what it means and it causes her to cry. He tells her that he loves her and gives her a kiss on the cheek.

Laura finds out that her mother is dying of uterine cancer, and goes to be with her. Her mother apologizes for the trouble they'd experienced when Laura was growing up. Bitter, Laura throws back her mother's words at her about God not giving someone more than they can handle. Later, her mother makes a recovery and manages to live without Nunzie, Laura's father, for the rest of the novel. Nunzie later dies alone in his house of heart failure.

Maurice's father, Morris, returns to the house. He has AIDS and is dying. He apologizes to Maurice, who is now 16 years old. They make amends and he tells Maurice that he just didn't know how to be a good father, he just was never shown how.

Laura meets a man named Michael, and Maurice is happy for her. He is glad that there is someone in Laura's life that will take care of her as she deserves. The reader learns that Laura has been married once before, but her first husband, shortly after marrying Laura was found cheating on her.

Laura moves in with Michael and moves out of the city. She still makes trips into the city to visit with Maurice, but it isn't like it used to be. Maurice's mother is arrested for possession and intent to sell, and spends two years in jail. In the meanwhile, because of her conviction, Maurice's family loses their apartment. He lives on the street, unknown to Laura, for several years. Still, he refuses to join a gang, opting instead to work for a messenger service riding a bike. Later, he finds a way to buy jeans wholesale, and resell them for a profit. Unfortunately, the people that work with him in the business are former and current gang members and he is caught in the crossfire at one point.

Maurice drops out of school, moves to North Carolina, meets someone and has his first child. He's kept in touch with Laura during all of this, but she only knows some of the details. She is very upset when he tells her that he's going to be a father. Because of his and his shame at not living up to Laura's expectations, he breaks off contact with her for another year. Laura's husband leaves her, and she moves back into the city. Maurice has moved back, himself, as his mother is dying of AIDS. He's been fairly successful with his business, having severed ties with the gang members. He's in his own place and, now in his late 20s, has several children. He and Laura make amends.

At the end of the novel, Maurice has started his own construction business and has five children. They live in a home much like Laura's sister's home in the suburbs. He's a good father, unlike his own, and he enjoys having Laura come visit. They both reiterate that both of them have lived better lives for having known one another.