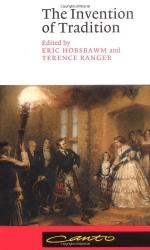 The Invention of Tradition Summary & Study Guide includes comprehensive information and analysis to help you understand the book. This study guide contains the following sections:

This detailed literature summary also contains Topics for Discussion and a Free Quiz on The Invention of Tradition by Eric Hobsawm and Terence Ranger.

The Invention of Tradition is a classic work of historiography, edited by the great British Marxist historian, Eric Hobsbawm and Terence Ranger, a prominent African historian. The book, which is in fact a compilation of seven works, focuses around a single theme of the invention of many so-called historical, cultural, and social traditions. This statement implies that these traditions were often deliberately created much later than many realize and arose in response to real social needs. 'Invented traditions' are often used by elites to manipulate the powerless but they are also used by a number of different institutions to maintain social unity and to prevent themselves from falling apart due to the challenges of rapid social change.

The essays in The Invention of Tradition analyze a number of traditions that were invented quite recently; the authors explain how the traditions were invented and why. They also point out that many groups can benefit by understanding the real history of their social practices. The methodology of the book is laid out in Chapter 1, 'Inventing Tradition', where Eric Hobsbawm explains both the concept of invented traditions and how the authors will proceed to illustrate it.

The authors take somewhat different approaches to analyzing tradition. For instance, in Chapter 2, 'The Invention of Tradition: The Highland Tradition of Scotland,' author Hugh Trevor-Roper analyzes the Scottish Highland traditions of food and dress. He shows that the kilt is not a historical form of Scottish dress and that Scottish national identity is actually several centuries younger than the Scots commonly believe. Trevor-Roper shows how these traditions were invented to promote a sense of Scottish unity.

Chapter 3, 'From a Death to a View, the Hunt for the Welsh Past in the Romantic Period' takes a similar approach to the Welsh nationalist movement. The author, Prys Morgan, shows how attempts during the late nineteenth century to revive Welsh culture and identity led to the invention of a number of new ceremonies. Both pieces track the pressure to invent traditions to the Romantic Movement in the nineteenth century and the desire for many English and Europeans to be part of a 'people.'

Other chapters focus on how ceremonies were invented to produce a sense of social cohesion. Chapter 4, 'The Context, Performance and Meaning of Ritual' analyzes the history of the British Monarchy's approach to royal ceremonial rituals between 1820 and 1977. The author argues that the nature of the ceremonies changed in response to a number of social factors that reflected the needs of the British people. Chapter 5, 'Representing Authority in Victorian India', shows how British Imperialists in India used the 'Imperial Assemblage' ceremony, where Indians were made official subjects of the British Empire, to replace local authority structures and create a historical myth. Both authors, David Cannadine and Bernard Cohn, focus on the details of ceremony and how they connect to the need to invent tradition.

Chapter 6, 'The Invention of Tradition in Colonial Africa', written by Terence Ranger, advances a similar thesis to Chapter 5, that imperial powers invented traditions to help legitimize their subordination of colonized peoples. Chapter 7, 'Mass-Producing Traditions' written by Eric Hobsbawm, argues that many traditions were created in Europe in order to produce national unity in response to the decline of other unifying social institutions like the church and regional affiliations in response to the social change of the late nineteenth century.

The Invention of Tradition from BookRags. (c)2022 BookRags, Inc. All rights reserved.