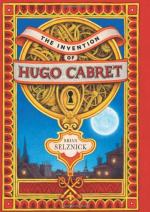 Brian Selznick
This Study Guide consists of approximately 42 pages of chapter summaries, quotes, character analysis, themes, and more - everything you need to sharpen your knowledge of The Invention of Hugo Cabret.

The Invention of Hugo Cabret Summary & Study Guide includes comprehensive information and analysis to help you understand the book. This study guide contains the following sections:

This detailed literature summary also contains Quotes and a Free Quiz on The Invention of Hugo Cabret by Brian Selznick.

“The Invention of Hugo Cabret” is a young adult mystery novel by Brian Selznick, told in both words and pictures. The novel revolves round 12-year-old orphan, Hugo Cabret, who lives in an old apartment above a train station in Paris, where he tends to the 27 clocks in the building each day. It is explained that Hugo’s father perished in a fire before the novel begins, and it is Hugo’s uncle who brought him to work as an Apprentice Timekeeper in the train station, though Hugo’s uncle also subsequently died before the novel begins. Hugo, for fear of being thrown out, carries on work as if his uncle is still there.

Hugo, like his father and uncle, is very gifted with mechanical skill. Hugo has been stealing toys from the old man who runs the toy booth at the station, hoping to use the parts to fix an automaton Hugo’s father had discovered in an old museum attic. Hugo’s father explained to him that automatons are mechanical devices designed to look like people or animals, that carry out specific functions or do specific tricks, usually to impress the audiences of magicians. The automaton that Hugo’s father discovered is designed to write. Both father and son are very interested in repairing and seeing what the machine may write, but Hugo’s father died before his work could be completed. However, Hugo keeps a notebook from his father with written observations and detailed drawings about the automaton, hoping to complete his father’s work, and imagining his father may have changed it so the automaton will spell out an entirely new message for Hugo from his father.

One day, the old man catches Hugo stealing from him and orders Hugo to turn out his pockets. The old man is especially interested in the notebook, stunned by its contents, and will not give it back to Hugo. The old man’s goddaughter, 12-year-old Isabelle, seeks to befriend Hugo, and vows to get the notebook back. The old man, Papa Georges, explains to Hugo that he may earn the notebook back if he works off the cost of all the items he has stolen. Hugo reluctantly agrees. However, he soon discovers he does not need the notebook to repair the automaton, for he can do it himself. He notices that there is one thing missing from the automaton: a heart-shaped key which will start it. He discovers that Isabelle wears such a key on a necklace, and he steals it from her. Later, as Hugo is about to start the automaton, Isabelle barges in, and though angry, is more interested to see the automaton work. But rather than write, the automaton draws a beautiful picture of the moon, and Hugo recognizes it as a scene from his father’s favorite movie. The automaton signs the drawing with the name Georges Melies –Isabelle’s godfather. Both children are stunned.

Hugo turns to an older friend he meets through Isabelle, Etienne, who studies and works at the French Film Academy, to help him research old films. Hugo borrows a book from the Academy’s library, which reveals the scene the automaton draws is from a film by Georges. Etienne, and his professor, Rene Tabard, go to visit Georges, having believed that he died years before. They are thrilled he is still alive. Georges reluctantly confesses the truth about his past: the he began work in his parents’ shoe factory, was impressed by the mechanical devices within it, later sold his share of the factory to become a magician and to build automatons, and eventually got into film. The entire time, his wife, Jeanne, was his best friend, closest companion, and muse. For Georges, film was about creating beauty and dreams. But after World War I, things changed for him. Competition in the film industry increased, and the death of close friends – Isabelle’s parents, her father being a cameraman for Georges – caused him to turn his back on the film industry. He burned nearly everything related to his past, except the automaton, which was donated to a museum where it was discovered years later by Hugo’s father. Georges has since been sad and without purpose in life.

Six months later, things have changed dramatically for both Georges and Hugo. Georges and Jeanne have taken Hugo in, and with a grant from the Film Academy, things have improved. Georges is honored and celebrated for his work, and it appears as if he will again begin work in film. At the end of the novel, it is revealed that all of the words and drawings contained within the book have been created by an automaton designed by Hugo himself.

More summaries and resources for teaching or studying The Invention of Hugo Cabret.

The Invention of Hugo Cabret from BookRags. (c)2022 BookRags, Inc. All rights reserved.