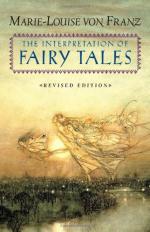 The Interpretation of Fairy Tales Summary & Study Guide includes comprehensive information and analysis to help you understand the book. This study guide contains the following sections:

This detailed literature summary also contains Topics for Discussion and a Free Quiz on The Interpretation of Fairy Tales by Marie-Louise von Franz.

All fairy tales can be said to involve some aspect of the Self, Jung's term for the unified consciousness and unconsciousness of a person. The beginning premise of a tale might demonstrate some problem with the Self; for example, an instance in which the unconscious is not in harmony with the ego, or consciousness. The hero of the fairy tale then steps in as the archetypal symbol of positive transformation of the Self. By the end of the tale, the hero will achieve a unified, matured Self.

Fairy tales are distinct from mythology, in that mythology is burdened by cultural-specific values and iconography, whereas fairy tales are free from cultural specificity and are thus more universal. Fairy tales themselves start as "local sagas," the product of an individual whose unconscious temporarily bubbles up to the surface in the form of a dream of hallucination. The local saga becomes embellished, generalized, and merge with similar tales in a process called "amplification," to the point it attains the universal status of the fairy tale.

"The Three Feathers" is about a king who is unsure of which of his three sons to give his kingdom to. He casts three feathers in the air and asks his three sons to follow each feather and locate the most beautiful carpet where the feather lands. The youngest son, Dummling, regarded as slow-witted, follows his feather to a trap door, where a talking toad gives him the carpet as well as other items the king requests. Finally, the toad turns into a beautiful woman whom Dummling marries, and the king proclaims Dummling as the heir.

In this tale, the king is the Self, and he is in a crisis of inertia. He is in danger of becoming stagnant and enervated. By casting the three feathers, he trusts his instincts and the spiritual world, the first step in transformation of the Self. Dummling is the agent who brings about full transformation. He summons up the Self's hidden female essence, the anima, from the cellar in the form of the toad who transforms into a princess. The anima is the playful, irrational, fantasy-oriented feminine aspect of men.

Females have an equivalent essence, the animus, though the danger with the animus is excess rather than lack. Females with excess animus behave with "manly" aggression, or often with paralyzing inertia. Several other tales are examined that feature heroines and the animus. Another Jungian concept looked at is the shadow, the double self which represents a distinct aspect of the Self. In "Prince Ring," the hero has both a positive double (a dog) and a negative double, and he must assimilate these two shadows into a unified Self by the end of the tale.