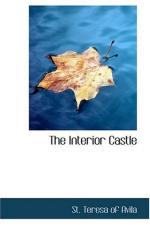 Teresa of Ávila
This Study Guide consists of approximately 49 pages of chapter summaries, quotes, character analysis, themes, and more - everything you need to sharpen your knowledge of The Interior Castle.

This detailed literature summary also contains Topics for Discussion and a Free Quiz on The Interior Castle by Teresa of Ávila.

St. Teresa of Avila's The Interior Castle was written in obedience to an assignment given her by the spiritual leaders in her monastic order, and was completed in 1577. It was to be a work on the subject of prayer, and throughout the book, Teresa talks about how intimidated she is to be writing on such an expansive topic. She is, however, given a vision of how such a thing might be explained, and so uses the analogy of a castle to describe the depths of intimacy with God that the human spirit passes through over a lifetime dedicated to prayer and contemplation. There are seven levels, referred to as dwellings, each one closer to the heart of God and further from attachment to the things of this world, each one involving both blessing and struggle.

The first dwelling is the one in which the individual first recognizes there is a castle to be explored and enters its doors by beginning prayer and self-examination. She describes the value of moving beyond rote, prescribed prayers written by other people and beginning a soul-revealing conversation with one's Creator. She also talks about how much the temptations of the world, described as serpents and reptiles, can still easily distract a soul in this very exterior place. She emphasizes, however, how important it is the soul remember how worthwhile getting through into the rest of the castle is, and so encourages perseverance through this temptation-riddled exploration.

The second dwelling differs from the first in that, while the soul is in deaf and dumb observation in the first dwelling, in the second she (as she refers to all souls, since she is addressing her sisters in the convent) is able to recognize the calling voice of God. It is not an audible call until much later, but comes through words spoken by teachers, friends, or that come in study. Along with the sharpening of the intellect that comes with this increased understanding, however, come vicious attacks from the enemy of souls to try to deceive and pull back into the world a soul who is beginning to find wisdom beyond it. She sites surrender to the will and calling of God as the only defense against those attacks.

The third dwelling is the one in which the soul must move beyond listening and understanding to doing, bringing the will into submission to the things she has seen will lead her into the likeness of her God. She stresses the importance of humility, as well, since human nature is so much more likely to work for recognition than purely out of selfless love and a desire to serve God. This is when the soul must battle how she feels and what she wants and train herself as a faithful servant willing to serve unnoticed. Remembering that every bit of progress and refinement which occurs in one's soul is the work of God and not the individual is another major lesson to be learned in this dwelling.

The fourth dwelling is when the soul begins to experience the supernatural. Being ever closer to the dwelling of the King, she says there are more and more beautiful things to see and understand, among them, what Teresa calls "consolations in prayer." These are gifts of joy given by God completely unrelated to things in this world, and they serve to expand the heart's capacity for joy, making them an incredibly valuable gift. This is also the dwelling in which Teresa places the "Prayer of Quiet", when the soul sits without speaking in the presence of God and listens for Him to speak, and the "Prayer of Recollection" when the soul remembers and rebuilds the place where it can go to pray, and retakes control from the senses.

The fifth dwelling is where the soul experiences the "Prayer of Union," a state in which the soul is completely withdrawn from the senses and is in removed union with the Creator. In this communion, the spirits and temptations of evil have no ability to distract or harm the soul. The soul is taught to recognize truth and goodness when it encounters it, and the appetite is refined to crave those things exclusively. She describes this process as replacing "false intelligence with true wisdom". Here she also introduces the analogy of the silkworm that she carries through the end of the book and says that in this stage, the silkworm builds the house in which it will die, that being Christ, the character to which she will give herself up to become like.

The sixth dwelling is when the soul really begins to ache with desire to be with her Creator and leave behind the world and its sad inconsideration of its God. She is wounded whenever she sees people out of communion with him and aches to be absorbed in worship all the time. She also recognizes more and more how imperfectly she is able to serve Him, and this wounds her deeply, as well. Teresa urges the practitioner experiencing this state still to strive to serve and improve the whole of her life in order to pass through this final trial improved by it.

The final dwelling is the one in which the soul finally wishes for infinite life so that she can serve her God forever. Suffering on earth is finally a pleasure, and is recognized as trifling compared with the suffering Christ did in giving up His royalty to live poor and die for His beloveds. She is so absorbed in the beauty of God that she looks eagerly for ways to serve Him, work she can do and secret ways of loving Him with her actions. The butterfly has died of happiness and has found her rest in the presence of her King.

More summaries and resources for teaching or studying The Interior Castle.