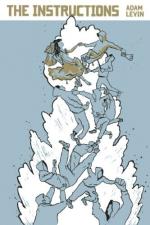 The novel is told from the point of view of Gurion Maccabee, who is also the protagonist. In every scene —whether it involves interactions with other students, his girlfriend June, his parents or school officials— Gurion is present either directly or through his narrative voice as he relates the story. The Instructions is basically Gurion's story of adolescence.

Primary setting is Northside Hebrew Day School in Chicago, although there are temporary shifts to Gurion's home, the hospital where his father is taken, and the grassy hill behind school where he meets with his followers before, during and after their confrontation with school authorities..

One stylistic anomaly, in particular, stands out anywhere there is dialogue. The author puts the words of Gurion in regular type, with no quote marks or italics, but places the words of other characters within the conventional...