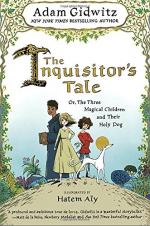 The Inquisitor's Tale: Or, The Three Magical Children and Their Holy Dog Summary & Study Guide

The Inquisitor's Tale: Or, The Three Magical Children and Their Holy Dog Summary & Study Guide Description

The Inquisitor's Tale: Or, The Three Magical Children and Their Holy Dog Summary & Study Guide includes comprehensive information and analysis to help you understand the book. This study guide contains the following sections:

This detailed literature summary also contains Quotes and a Free Quiz on The Inquisitor's Tale: Or, The Three Magical Children and Their Holy Dog by Adam Gidwitz.

The following version of the book was used to create this guide: Gidwitz, Adam. The Inquisitor’s Tale Or, the Three Magical Children and Their Holy Dog. Dutton Children’s Books Penguin Young Readers Group, An imprint of Penguin Random House LLC, 2016.

The Inquisitor’s Tale Or, the Three Magical Children and Their Holy Dog, by critically acclaimed novelist Adam Gidwitz, is a story set in medieval time that is relevant to today’s world. Gidwitz tackles difficult themes about religion and persecution while creating an engaging tale full of action and humor.

The novel begins with the narrator sitting in the Holy Cross-Roads Inn hoping to collect stories about three children who are said to perform miracles and their dog, who is considered holy by the villagers where she lives. Several people come forward throughout the novel to add their stories to the overall plot of the novel.

The action begins with a description of Jeanne’s childhood. Jeanne is a peasant girl whose parents have very little at the time of her birth except for a beautiful white greyhound named Gwenforte. One day while they are working in the fields Gwenforte kills a snake. Jeanne’s parents misinterpret the blood on the dog’s coat and kill her because they believe she harmed Jeanne. They discover that the dog saved Jeanne and from then on the village consider Gwenforte holy.

When Jeanne is older she begins to have visions. She does not tell anyone about them because she fears she will be burned as a witch. In a vision she sees men coming to burn the grove Gwenforte is buried in and she sees Gwenforte standing on her grave. She goes to the grove and finds the dog alive and knights coming to take her away. Jeanne is eventually captured by the knights and taken away from her village.

Meanwhile, another person tells about Jacob, who is a Jewish boy. Jacob is a smart boy with a gift for healing. When his village is burned, he finds the butcher with a serious head injury that he heals in moments with yarrow root and a prayer. Jacob is separated from his parents during the fire and leaves to travel to his cousin Yehuda’s house in Saint-Denis where he hopes to find his parents.

William’s story begins with William being dropped off at a monastery when he is just a baby. He is the son of a wealthy Lord and a woman from Africa. He has dark skin and is unusually large. William is intelligent and enjoys a good argument. When he argues with a monk and breaks a stone bench with his bare hands, he is expelled from the monastery and sent to take some books to the abbot in Saint-Denis.

The children meet when Jeanne is brought to the inn by the knights, William stops there for the night, and Jacob wanders there in search of food. William helps Jeanne and Jacob to escape the knights and they decide to all go to Saint-Denis together.

When the children reach a village, Jeanne and Jacob go into the market to ask directions to Saint-Denis. Jeanne spots Michelangelo di Bologna, a monk with a reputation for taking heretics away to be burned. They try to run, but the two are captured by knights.

While Jeanne and Jacob are travelling with the knights, Jeanne has a vision and sees a dragon. When they arrive at the home of Lord Berthulf, Jeanne tells the lord that Jacob can defeat the dragon.

The knights go with Jeanne and Jacob to battle the dragon, who is said to burn people with its deadly flatulence. Jacob says he needs to see the dragon to figure out how to beat it, so they lure the dragon to them. One of the knights is badly burned and Jacob heals him with plants and a prayer. The knight’s brother, Marmeluc, is grateful and becomes friends with the children. Jacob heals the dragon by curing its stomachache.

That night Jeanne and Jacob attend a feast in the lord’s hall. William bursts in to save them and Jeanne explains that the people there are friends and William should not harm them.

Michelangelo takes them to Rabbi Yehuda’s house, who is Jacob’s cousin. Jacob’s parents are not there.

The children go with Michelangelo and they meet King Louis who invites them to stay at his palace. King Louis and his mother, Blanche, have ordered the book burning.

Michelangelo devises a plan for Jacob and Jeanne to grab books from the pyre while he creates a distraction and William defends them. At the book burning, Michelangelo climbs on the pyre and is burned with the books. Jacob grabs some books, but they are knocked out of his hands as he runs.

The children are saddened by Michelangelo’s death. William remembers that there were strange looking books in the packs he was supposed to deliver to the abbot, but were left at the inn when they ran from the knights. The children go back to the Holy Cross-Roads Inn where they discover there are Jewish books in the bag. They also meet the narrator who has been collecting the stories.

The narrator offers to travel with the children to take the books to Mont-Saint-Michel as Michelangelo had instructed them to do before the book burning. On the way, he reveals that he is an inquisitor and that he had planned to capture the children and turn them in for heresy or kill them so he could claim he discovered them as saints. However, he now believes they are saints and cannot kill them.

Just before they reach Mont-Saint-Michel, the king and his knights arrive. The children and the narrator are lead through dangerous quicksand by an old hunchback they meet at an inn. The knights sink in the sand and die. When Blanche tries to race after them, she sinks, too, but the children save her. The king lets the children leave and take the books with them.

The children continue to Mont-Saint-Michel where they discover that Michelangelo is not dead and that he is the Archangel Michael. He tells them they can either go their separate ways or continue to travel together doing God’s work.

The Inquisitor's Tale: Or, The Three Magical Children and Their Holy Dog from BookRags. (c)2022 BookRags, Inc. All rights reserved.