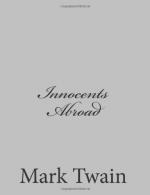 Mark Twain
This Study Guide consists of approximately 77 pages of chapter summaries, quotes, character analysis, themes, and more - everything you need to sharpen your knowledge of The Innocents Abroad.

This detailed literature summary also contains Topics for Discussion and a Free Quiz on The Innocents Abroad by Mark Twain.

The Innocents Abroad is a travel diary written by the humorous, controversial, say-it-like-it-is author, Mark Twain. In a time when novel ideas are trendy, a great pleasure excursion is announced. The cruise promises an enviable adventure to be remembered by only those select passengers who are privileged enough to attend. For Mark Twain, the trip turns out to be a microscopic study into the nature of human beings. This includes, not only his ship companions, to whom he grows unnaturally close, but the people of cultures foreign to his own. Twain muses on his own American arrogance, his ignorance of foreign customs, the even greater ignorance of his travel companions and the grandness of it all. The excursion, however, is not as glossy as the original program advertises. Each feature, in reality, contains a flaw or slight misrepresentation that Twain is cordial enough to point out as he passes it.

The experience is told from a very realistic, and sometimes sarcastic and funny, viewpoint. Mark Twain is brutally honest about each detail and is not afraid to go against the grain of popular opinion. During portions of the trip, he becomes understandably fatigued, and at other times, downright frustrated. Twain takes the reader through all the emotion and stress of a long, busy excursion, but also presents the fun and adventurous side of it. There are times when Twain is so burned out on tourist attractions — specifically old things and paintings — that he comes right out and says he's tired of it and will not mention it. Other times, when a site is uninteresting to Twain, he plucks passages right out of his tour book and quotes them in the journal entry. Most of the time there is a sense of obligation, where, even though Twain might feel less than excited about a specific highlight, he wants to at least provide a suitable description so the reader will not feel cheated. But even when a situation is negative, such as all the ship quarantines, Twain will do something completely unconventional to turn it into a thing of great humor.

Author and reader alike sail along, learning about communication, law and mischief in the different lands of the world. Twain forms close ties with many of his shipmates, who he comes to think of as family by the end of the trip. The ship itself becomes home, and all the while, Twain and his friends are forever grateful to be American. Upon returning to America and resuming his old life, Twain reemphasizes the impact the trip has made on his life, how he met great friends, saw unimaginable wonders of the world and has grown in both character and culture. He explains that sometimes an experience is appreciated the most afterward, when all the bad things are filtered out and only the good things remain in one's memory.

More summaries and resources for teaching or studying The Innocents Abroad.