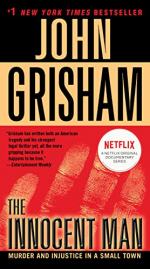 John Grisham
This Study Guide consists of approximately 39 pages of chapter summaries, quotes, character analysis, themes, and more - everything you need to sharpen your knowledge of The Innocent Man.

This detailed literature summary also contains Topics for Discussion on The Innocent Man by John Grisham.

The following version of this book was used to create this study guide: Grisham, John. The Innocent Man. New York: Doubleday, 2006.

The Innocent Man is a nonfiction book focusing on four wrongful convictions related to crimes that took place in the small town of Ada, Oklahoma. The book begins with a description of the murder of Debbie Carter, a young waitress who lived in Ada. The most likely suspect was Glen Gore, a local man with a history of violence against women. Gore was seen with Debbie on the night of her murder. However, the police did not investigate Gore, likely because Gore often sold illegal drugs to the police. Instead, the police chose two suspects essentially at random: local men Ron Williamson and Dennis Fritz. There was no evidence linking either of the men to the crime, but the police harassed them and forced false confessions from them.

In 1984, another young woman in Ada was murdered. The police again chose two suspects with no evidence linking them to the crime. The police harassed two local men—Tommy Ward and Karl Fontenot—and coerced false confessions from them. Ward and Fontenot were convicted and sentenced to the death penalty. When the victim’s body was later found, and shown to be inconsistent with the details of the forced confessions, Ward and Fontenot were not granted another trial. Ron and Fritz were then put on trial. Despite the fact that Ron Williamson suffered from severe mental illness, the court declared him mentally competent enough to stand trial.

The prosecutor, Bill Peterson, used several unethical and illegal tactics during the trial, such as misrepresenting evidence misleading the jury, and even illegally suppressing evidence that could have helped the defense. Ron and Fritz were both convicted. Ron was sentenced to the death penalty, and Fritz was sentenced to life in prison. Ron was transferred to the same death row where War and Fontenot were being kept. The conditions there were extremely inhumane, and Ron suffered severe deteriorations in both his physical and mental health.

Eventually, defense attorneys took an interest in Ron’s case and began to help him with the appeals process. Meanwhile, Dennis Fritz contacted the Innocence Project, an organization that had begun to use DNA testing to overturn false convictions. Ron and Fritz were in prison for over a decade, but in 1999, they were exonerated by DNA testing and were set free. However, the Ada police and prosecution continued to treat them as suspects in the Debbie Carter murder case. Ron and Fritz then sued the police and prosecution. After it became apparent that the lawsuit was leaning in favor of Ron and Fritz, the lawsuit was settled out of court. Ron and Fritz received large sums of money in settlement payments. Unfortunately, Ron died of cirrhosis of the liver in 2004, at the age of 51. Tommy Ward and Karl Fontenot are still in prison for a crime that they did not commit.

More summaries and resources for teaching or studying The Innocent Man.