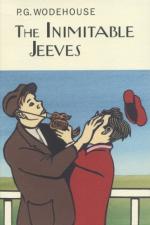 P. G. Wodehouse
This Study Guide consists of approximately 33 pages of chapter summaries, quotes, character analysis, themes, and more - everything you need to sharpen your knowledge of The Inimitable Jeeves.

This detailed literature summary also contains Topics for Discussion and a Free Quiz on The Inimitable Jeeves by P. G. Wodehouse.

Bertie Woosterappears in All Chapters

Bertie Wooster is a member of the British upper-class, specifically the Idle Rich. He is perhaps in his late-20s, though an exact age is never given, beyond the fact that he attended Oxford several years ago. He comes from a family of great wealth, and therefore he needs no job to support himself. In fact, he calls betting on horses his career. His days are spent at the gentlemen's club, or having lunch, or visiting an acquaintance's country estate. He has no worries about money, though he wants to accumulate more through betting, and he frequently must give his friends like Bingo and Claude and Eustace money to get by.

Bertie is a bit of a clown, and his free-spiritedness combined with lack of responsibility and lack of work ethic is always getting him in trouble with his society and relatives, especially Aunt Agatha. He is desperate not to marry or settle down, considering that a kind of death, but Agatha is always pressing him to date this or that eligible noblewoman. Bertie is very immature, wanting only to play and eat all day like a child, and this immaturity gets him into all sorts of trouble.

As a sort of child-man, Bertie relies upon his trusty valet Jeeves to solve his problems and perform damage control after comic misadventures. Bertie has a very high opinion of Jeeves and considers him a perfect and wise man to be constantly consulted. However, Bertie rejects any notion that he is less than intelligent or capable of solving his own problems, although when he attempts to solve his own problems he usually makes matters worse.

Jeeves' is Bertie Wooster's ever-present valet. He is improbably wise and worldly, and he has an uncanny ability to offer brilliant advice and intervene in Bertie's affairs in order to save the poor chap. Jeeves is characterized as nearly omniscient: he possesses an amazing amount of knowledge about most any subject. Bertie depends upon Jeeves' advice heavily when making any important decision.

Despite his vast knowledge and foresight, Jeeves has the propriety and discretion of a perfect valet. He rarely offers advice or opinions unless asked, and even then he is very tight-lipped, usually offering a "Yes, Sir" or "No, Sir" in response to questions. On the surface, he appears to be uninterested in Bertie's affairs, remaining emotionless even when Bertie feels he is "in the soup," meaning in a very bad situation. However, behind the scenes Jeeves is very active in making sure Bertie is protected and unharmed in his various misadventures, performing actions without Bertie's knowledge.

While nothing really fazes Jeeves, he has a strong opinion about fashion, feeling a very conservative approach is most prudent. Bertie sometimes has a penchant for unusual or loud clothing and accessories, and when Bertie persists in wearing such articles despite Jeeves' objection, Jeeves has a bit of a fit and, for example, won't give Bertie advice when asked.

In his off time, Jeeves reads books in order to improve himself. Much of his personal life is never depicted: he exists to save Bertie from himself.

Bingo Littleappears in All Chapters

Richard "Bingo" Little is Bertie's best friend. Bertie and Bingo went to Oxford together. While they are both members of the Idle Rich, Bingo must please his uncle in order to receive his life allowance. Bingo has a weakness for women and romance, and is always falling in love rapidly, which provides Bertie and Jeeves plenty of challenges.

Honoria is a woman Bertie's Aunt Agatha fixes Bertie up with. Bingo becomes infatuated with the girl, but the feeling quickly passes. In an effort to get Honoria closer with Bingo, Bertie inadvertently attracts Honoria to himself, and for a while Bertie and Honoria are engaged. Bertie is able to break the engagement when Jeeves convinces Honoria's father Roderick that Bertie is crazy.

Aunt Agatha is Bertie's domineering, shrill old aunt. She is always insisting that Bertie settle down, grow up, and marry someone, and in this vein she sets Bertie up with several women. Bertie is afraid of Agatha, and he dares not openly contradict her, and so he must always cook up some scheme to please Aunt Agatha but prevent being married.

Cyril Bassington-Bassingtonappears in Chapters 9 and 10

The doubly-named Cyril is a young nobleman who comes to stay with Bertie while he is in the United States. Secretly, Cyril wants to pursue a theatrical career, and he gets a small part in a musical comedy. However, Jeeves spoils Cyril's ambitions by bribing a young boy to ridicule him in front of the boy's father, the musical's manager.

Cynthia Corday Rowbothamappears in Chapters 11 and 12

Cynthia, considered by Bertie to be a "vile" woman, is the daughter of a Communist revolutionary, Old Rowbotham, and she has inherited some of her father's ideals and forcefulness. Bingo falls in love with her and masquerades as a Communist Red Dawn member in order to get closer to her and win her affections. However, Bingo must fight with Comrade Butt for Cynthia's affection.

Claude and Eustace are twin cousins of Bertie, who attend Oxford. Criminals in the making, they are always getting into trouble, whether it's stealing a car to get into Oxford's Seekers club, or getting expelled from school for dousing a school official with soda water. In one episode, they both fall in love with Marion, and decide to skip out on their exile to South Africa.

Steggles, called a "rat" by Bertie, is the immoral originator of the Sermon Handicap and the school treat betting pools. He sets odds for his betting pools and then goes about sabotaging competitors in order to make Bertie and his friends lose bets.

Rosie M. Banks is a novelist of popular romance novels. Bingo courts and marries a waitress at a gentleman's club, who was revealed to be Rosie in disguise doing research for her next book. She is outraged that Bertie impersonated her and demands an explanation. She is only assuaged when she is told by Jeeves that Bertie is insane.

More summaries and resources for teaching or studying The Inimitable Jeeves.