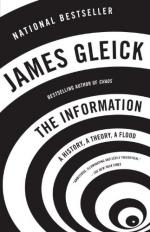 The Information: A History, a Theory, a Flood Quotes

"The raw material lay all around, glistening and buzzing in the landscape of the early twentieth century, letters and messages, sounds and images, news and instructions, figures and facts, signals and signs: a hodgepodge of related species. They were on teh move, by post or wire or electromagnetic wave. But no one word denoted all that stuff." (Prologue, p. 7).

"No such science, no such pragmatism informed the language of the drums. Yet there had been a problem to solve, just as there was in the design of a code for telegraphers: how to map an entire language onto a one-dimensional stream of the barest sounds." (Chapter 1, p. 21).

"With words we begin to leave traces behind us like breadcrumbs: memories in symbols for others to follow. Ants deploy their pheromones, trails of chemical information; Theseus unwound Ariadne's thread. Now people leave paper trails." (Chapter 2, p. 31).

The Information: A History, a Theory, a Flood from BookRags. (c)2023 BookRags, Inc. All rights reserved.