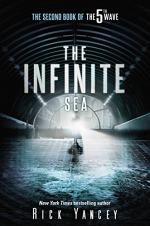 Rick Yancey
This Study Guide consists of approximately 62 pages of chapter summaries, quotes, character analysis, themes, and more - everything you need to sharpen your knowledge of The Infinite Sea.

This detailed literature summary also contains Quotes and a Free Quiz on The Infinite Sea by Rick Yancey.

"The Infinite Sea" by Rick Yancey is a science fiction novel intended for a young adult audience. It follows a group of teenagers and children, especially protagonists Cassie and Ringer, as they adapt to and survive in a post-apocalyptic world threatened by alien entities intent on squashing humanity. Overcoming their fears, the characters face each new challenge with bravery and purpose as they define what it means to be human.

Ringer leaves her group at Walker Hotel as she sets out in search of a new hideout, but when she is followed, she shoots her pursuer who turns out to be her young friend, Teacup. Evaluating the risks as the enemy approaches, Ringer decides against abandoning or killing Teacup.

While Cassie and Sam struggle with their father's death, Teacup sneaks off to follow Ringer, and Poundcake follows to retrieve her. When Dumbo disappears as well, Cassie and Zombie search for the intruder who incapacitates Zombie, but Cassie shoots the intruder and knocks him unconscious.

In his younger years, Evan was overcome by an alien entity, and in the present, he wakes from the injuries incurred at Camp Haven to find Grace tending his wounds. Intent on keeping his promise to return to Cassie, he incapacitates Grace and escapes, but she follows him. They are attacked, allowing Evan to flee to Walker Hotel where his stealthy entrance causes Cassie to attack him.

At age eight, Poundcake is put in charge of his three-year-old brother and stops talking when the younger boy disappears. Poundcake is captured and trained as a soldier for the Others.

Despite her anger at him, Cassie nurses her beloved Evan, fearing he will die. A chopper deposits Megan at the hotel, and furious that Vosch is using young children as bombs, Cassie disables the bomb and saves the girl's life with Evan's guidance. Grace arrives at the hotel and attacks, fatally wounding Poundcake. Evan insists Cassie and her friends leave, entrusting Cassie with the bomb to attack the mothership and end it all. While they are still in the parking lot, an explosion rocks the hotel.

Poundcake is abandoned in the parking lot because he is dying, so he uses his last moments to retrieve the bomb and enter the hotel where he battles Grace before detonating the bomb.

Ringer has been captured by Vosch who uses Teacup's life as leverage. He orders Dr. Claire to inject Ringer with the 12th System, but she befriends Razor, an enemy recruit who helps her plan her escape. After killing Dr. Claire, Ringer rescues Teacup and escapes with Razor's assistance. After bailing from the chopper stolen in their escape, Ringer finds Razor who leads her to a warehouse where he claims Teacup is waiting; however, their kiss allows Ringer to see his betrayal, and inside, she finds Vosch who explains that her escape was designed to test the 12th System. Razor tends Ringer's wounds, often urging her to run, but she refuses. When Vosch returns with Teacup, he is pleased by Ringer's progress as she realizes that he plans to use her to track Evan who possesses dangerous knowledge. Razor kills Teacup and is shot, allowing Ringer to jump to freedom.

Meanwhile, Cassie and the survivors from her group have set up camp in the woods. An intruder arrives, and Cassie is happily reunited with Evan.

More summaries and resources for teaching or studying The Infinite Sea.