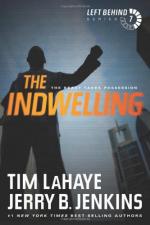 This detailed literature summary also contains Topics for Discussion on The Indwelling: The Beast Takes Possession by Tim LaHaye.

The Indwelling: The Beast Takes Possession by Tim LaHaye and Jerry B. Jenkins begins where the former book in the series, "Assassins," ends. There are millions of people gathered at a gala to honor Nicolae Carpathia, the man who is believed to be the Antichrist. Members of the Tribulation Force, believers in Christ, are in the audience. A shot rings out and Carpathia collapses.

Buck Williams, a member of the Tribulation Force, braces himself against the platform. Chaos ensues as two million people stampede and rush to get away from the area in which Supreme Potentate Nicolae Carpathia has just been murdered. Thousands of people rush by Buck who struggles to find safe ground. Buck had heard a gunshot 100 feet to his right. It sounded like a rifle or perhaps the small gun Carpathia had used when killed Moishe and Eli at the Wailing Wall three days before.

Characters from other books are reintroduced, including Captain Rayford Steele, leader of the Tribulation Force. Steele is in the audience at the gala. Steele has planned to kill Carpathia but the plan goes awry. Instead, Chaim manages to stab Carpathia through the skull, killing him instantly. The crowd goes wild and the entire world falls into chaos.

Hassid and Annie try to gain as much information as possible as the entire GC headquarters is in a frenzy preparing to view and eulogize the Supreme Potentate. Additionally, millions of people worldwide flood into New Babylon for the occasion, leaving Hassid and others to make arrangements while keeping the members of the Tribulation Force informed. Despite evidence to the contrary, Steele is being blamed for Carpathia's death.

The GC learns about the Tribulation Force's safe house in North America. Tsion barely escapes GC forces and is rescued by Albie, Steele and others. Hassid has found a new safe house in Chicago if the TF can manage to get there.

Informants keep the TF ahead of the GC just barely by minutes. Meanwhile, Carpathia's second in command, Leon Fortunato, is glad to take over his mentor's role as Supreme Potentate. Hassid's beliefs about Carpathia's role as the Antichrist are confirmed when Carpathia's life-like statue speaks to the crowd and Carpathia is resurrected.

This part of the series ends quickly and dramatically with the resurrection of Carpathia. Even the believers are frightened of the man's power. If any believers had doubts that Carpathia is the Antichrist, those doubts disappear in this section. The ensuing events do not bode well for the Tribulation Force. Carpathia has all but issued a declaration of war on the believers.