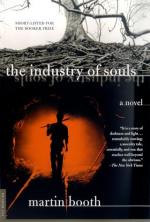 The Industry of Souls Topics for Discussion

Martin Booth
This Study Guide consists of approximately 40 pages of chapter summaries, quotes, character analysis, themes, and more - everything you need to sharpen your knowledge of The Industry of Souls.

Discuss Kirill's role in Shurik's future. How much of an impact did he have on the path that Shurik's life eventually took?

What did Shurik have to do in order to survive the gulag? What did he learn from his friends?

Discuss the "exploitation of power" in all its facets. Who or what was exploiting whom in this story?

Shurik chooses not to return to his native country. How did he reject his country? Was he a traitor?

Discuss some possible real reasons why Shurik may be been imprisoned in the gulag for twenty-six years, when he was neither tried nor convicted in a court of law? Discuss how this question might possibly be related to the perversion of nature in the story, in light of the Soviet system of government versus the natural order of the world.

More summaries and resources for teaching or studying The Industry of Souls.

The Industry of Souls from BookRags. (c)2023 BookRags, Inc. All rights reserved.