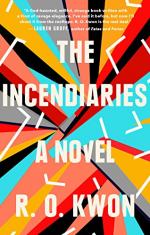 The Incendiaries Summary & Study Guide includes comprehensive information and analysis to help you understand the book. This study guide contains the following sections:

This detailed literature summary also contains Quotes and a Free Quiz on The Incendiaries by R. O. Kwon.

The following version of this book was used to create this study guide: Kwon, R.O. The Incendiaries. Virago, 2018. Kindle AZW file.

The Incendiaries tells the story of students Will and Phoebe and their involvement with an enigmatic cult leader, John Leal, which ultimately leads to tragedy. The novel begins with the narrator, Will, imagining a group of people gathering on a rooftop to watch an explosion. The narrator directly addresses a character named Phoebe, stating a desire to understand her actions. The chapters alternate between the perspectives of Will, Phoebe, and John Leal: for the purposes of this summary each strand is summarized separately, until the point in the narrative timeline that the lives of the characters converge.

John Leal worked with an activist group in China assisting people escaping from North Korea. John Leal was arrested and imprisoned in a North Korean gulag where he witnessed many harrowing things. He was released from the gulag and ordered to march across a frozen lake back to China. He returned to the United States but was haunted by visions of a woman who had died in the gulag. He returned to Noxhurst, the town containing Edwards college, from which he had been expelled several years earlier. He planned to do God’s work.

From a young age, Phoebe desired to be a successful pianist. She dedicated her childhood to learning the piano, and became particularly obsessed with learning an especially challenging piece of music. Her piano teacher was amazed by her performance of the piece and rewarded her with a gift: a famous recording, said to be the best performance ever achieved of the piece Phoebe had learned. Phoebe was so upset by the quality of the performance, and her knowledge that she could never play it that well, that she quit the piano entirely and withdrew her applications to music conservatoires. After arguing with her mother about quitting the piano, Phoebe drove the two of them home whilst crying. They got into a car crash that Phoebe survived but which killed her mother. When Phoebe arrived at Edwards College, she started dating Will.

Will transferred to Edwards after losing his faith in Christianity and dropping out of Bible College. Will’s poor background made him feel like an outcast at Edwards so he lied about his background to Phoebe and his fellow students, and hid his job in an Italian restaurant that he needed to help him pay for tuition. When Will confessed to Phoebe that he had been lying to her, she was initially angry with him but agreed to work things out as long as he did not lie any more in the future.

A friend of Phoebe’s, Liesl, accused a fellow student of rape and later died in an apparent suicide after falling from a building. Will spent the summer at an internship in Beijing, leaving Phoebe alone at Edwards where she had to take remedial summer classes to avoid failing. When Will returned from Beijing, he discovered that Phoebe had been attending meetings of a religious organization called Jejah, run by John Leal, who had been a friend of Phoebe’s father.

Will became concerned about the intensity of Phoebe’s dedication to Jejah, especially after she began attending anti-abortion rallies with the group, which Will also attended. Phoebe’s friend Julian told Will that Phoebe blamed herself for Liesl’s death: something Will was not aware of. After arguing with Phoebe about her dedication to Jejah, Will raped Phoebe. Phoebe left Will and Will respected her wish not to see him.

After hearing some students at a party discussing a dramatic news event, Will discovered that a series of local women’s clinics had been attacked by terrorists and that five young women were killed. Convinced that Jejah were involved, and worried about Phoebe’s wellbeing, Will reported his concerns to the school and he was interviewed by the FBI, who believed Phoebe was responsible for the bombing that killed the five women. Despite evidence to the contrary, Will continued to insist that Phoebe could not be responsible and that she must be being manipulated by John Leal.

An FBI agent informed Will of a credible report that Phoebe had committed suicide by jumping into the Hudson River. After graduation, Will bumped into Phoebe’s friend Julian who blamed Will, specifically the rape, for what happened to Phoebe. Despite this, Will continued to irrationally believe that Phoebe was still alive and would return to be with him one day.