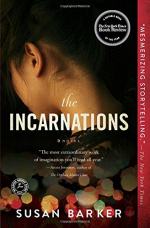 Susan Barker
This Study Guide consists of approximately 41 pages of chapter summaries, quotes, character analysis, themes, and more - everything you need to sharpen your knowledge of The Incarnations.

The Incarnations Summary & Study Guide includes comprehensive information and analysis to help you understand the book. This study guide contains the following sections:

This detailed literature summary also contains Quotes and a Free Quiz on The Incarnations by Susan Barker.

The Incarnations is a gentle-fantasy novel by Susan Barker in which an unknown letter writer attempts to get Beijing taxi driver Wang Jun to recall his past lives, and realize he himself has been reincarnated. When the novel begins and Wang starts receiving letters, he believes he is being stalked. The letters claim the writer, an unknown woman, knows much about him. The police do not find the letters threatening or reflective of a stalker, so Wang is forced to rely on himself to figure out who the writer is. He is very protective of his life, especially his wife, Yida, and their daughter, Echo.

Wang, the son of a degenerate high-ranking party official, has strained relations with his father long after his mother’s death while Wang was in college; and has strained relations with his stepmother, Lin Hong. It is because of this that Wang is all the more protective of his own family, meaning he is very concerned when the letters begin arriving. Each letter not only reveals the writer has been watching and following Wang, but knows many things about him.

Especially troubling to Wang is when the letters begin to explain that he has been reincarnated six times, with his present incarnation as Wang being the sixth. Wang does not believe any of this, and is thrown off even more when the letters begin describing his past lives, including that of a Red Guard teenage girl, a traitorous concubine, a gay young boy during a Mongolian siege, a 13-year old-female prostitute, and a captive taken by pirates. In each account, the souls of Wang and the writer lead to the other’s downfall due to fate’s circumstances beyond their control. In the present, the writer hopes that she and Wang will defy fate and finally be together.

Wang comes to suspect the letter writer as being a man named Zeng, with whom Wang had an illicit homosexual affair while both were in a psychiatric hospital. Wang urges Zeng to stay away from him, while Zeng’s jealous and underage lover texts pictures of Wang and Zeng to Yida. This leads to the dissolution of Wang’s marriage. Zeng denies any involvement with the letters. When they keep coming, Wang beats up Zeng and threatens more harm if Zeng persists. Still, the letters continue.

The letter writer reveals herself to be Shuxiang, the presumed-dead mother of Wang. Shuxiang writes again to Wang, revealing who she is and all that she knows. She even appears to Wang, but Wang does not consider her to be the letter writer. Instead, he blames Zeng once more. He goes to pick up Zeng in his taxicab, then crashes off a bridge to kill both himself and Zeng. At Wang’s wake, Shuxiang introduces herself to Echo, and explains that Echo, too, is reincarnated. She then gives Echo a pack of letters which she tells Echo will make sense when she is older. Echo then sneaks over to a friend’s house bearing those letters, and the letters written to her father, and begins to read them.

More summaries and resources for teaching or studying The Incarnations.

The Incarnations from BookRags. (c)2022 BookRags, Inc. All rights reserved.