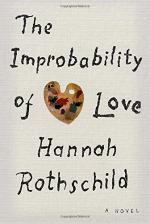 Hannah Rothschild
This Study Guide consists of approximately 47 pages of chapter summaries, quotes, character analysis, themes, and more - everything you need to sharpen your knowledge of The Improbability of Love.

The Improbability of Love Summary & Study Guide includes comprehensive information and analysis to help you understand the book. This study guide contains the following sections:

This detailed literature summary also contains Quotes and a Free Quiz on The Improbability of Love by Hannah Rothschild.

The Improbability of Love is a satire about the wealthy - and sometimes sinister - world of international art collecting. Annie McDee, a 31-year old woman has moved to London from a smaller English town after the end of her relationship with a man named Desmond who was also her business partner. Annie is a personal chef which she feels is a dead end job. The job, plus the end of her personal life, have drained Annie of all enthusiasm for life. She has recently taken up with a man to stave off loneliness but he really wants to return to his wife and children. Annie buys a painting for him in a junk shop and plans to give it to him for his birthday, along with a special dinner. Unfortunately, he doesn't come for dinner and Annie is left with a painting she doesn't want so she plans to return it. When Annie arrives at the site of the junk shop the next day, she learns that it has burned down and its owner has died. She is now out of money she couldn't afford to lose and is stuck with a painting she doesn't want.

Unbeknownst to Annie, she has purchased a masterpiece titled "The Improbability of Love" painted by French artist, Jean-Antoine Watteau. The painting is able to speak to the reader and shares its celebrated past as property of royals and wealthy notables in world history. Annie determines to trace the origins of "The Improbability of Love" and slips into the mysterious world of art collecting. In her attempts to learn about the painting's provenance, she meets a starving artist named Jesse who quickly falls in love with her. Annie keeps Jesse at a safe distance, though, because she is not willing to have her heart broken again. Adding to Annie's personal grief is the recurring inappropriate behavior of her alcoholic mother, Evie.

Taking a temporary cooking job with the Winkleman family, well known in the international art world, she is introduced to the wealthy and powerful. Annie's painting had been the property of the Winkleman family but was lost to them and the head of the Winkleman family, Memling, is fierce in his pursuit of it. Memling's daughter, Rebecca, discovers that her father is not who he says he is, having taken on the identity of a Jewish Holocaust survivor and building an art empire with his duplicitous greed.

Rebecca can't afford to have the Winkleman empire collapse if the public were to find out about the Winklemans so she frames Annie for theft and murder of the junk shop. What once was a simple purchase of an assumed simple piece of art lands Annie in prison as the Winkelman family scrambles to cover its horrific behaviors. Love does conquer all, however, and Annie is released from prison after Jesse's refusal to believe in Annie's guilt and his perseverance in ferreting out the truth.

More summaries and resources for teaching or studying The Improbability of Love.

The Improbability of Love from BookRags. (c)2022 BookRags, Inc. All rights reserved.