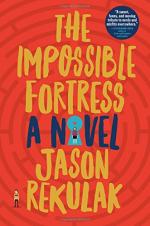 Rekulak, Jason
This Study Guide consists of approximately 36 pages of chapter summaries, quotes, character analysis, themes, and more - everything you need to sharpen your knowledge of The Impossible Fortress.

This detailed literature summary also contains Quotes and a Free Quiz on The Impossible Fortress by Rekulak, Jason.

This study guide was created using the following version of this book: Rekulak, Jason. The Impossible Fortress. Simon & Schuster, 2017.

The Impossible Fortress is set in 1987 and follows the story of Billy Marvin, who is just under 14 years old at the beginning of the novel. Billy lives in Wetbridge, New Jersey with his single mother, Beth. He is in the ninth grade, as are his two friends, Alf and Clark. Billy is highly interested in computers, and he and his friends are social outcasts at school. One day, they discover that the new issue of the magazine Playboy contains nude photos of celebrity Vanna White, and they begin to strategize as to how to acquire a copy. The magazine is being sold at a local office supply store owned by gruff Sal Zelinsky. In the store, Billy meets Sal’s 14-year-old daughter, Mary, who is also very interested in computers and programming. Billy and Mary decide to work on a video game together to enter into a contest for teenage programmers.

One night, Alf contacts an older boy named Tyler Bell, who used to work in the office supply store. He shows Alf, Clark, and Billy how they could break into the store using the roof hatch, but they would need to know the alarm code. Billy volunteers to acquire the code from Mary, but he does not actually plan on doing so. He only wishes to spend more time with Mary. Billy and Mary continue to work on their video game, which is called The Impossible Fortress. Billy had already made most of it, but it runs very slowly, so Billy and Mary study advanced coding to attempt to fix the problems with the game. Meanwhile, Alf tells Billy and Clark that he plans to photocopy the magazine once they have it and sell the photocopies to other students. He begins accepting payments in advance from students. However, Alf accidentally loses the money and thus has no way of returning it should he fail to acquire the magazine.

Alf pressures Billy to acquire the alarm code as soon as possible, but Billy refuses and they have a fight. Billy and Mary soon finish their game and mail it to the contest. While Mary is locking up the office supply store, Billy kisses her, as he has developed romantic feelings for her, and she has made it clear that she has romantic feelings for him as well. However, Mary pushes him away and says that they cannot have a relationship. Billy accidentally sees her input the alarm code. The next day, Alf says that he plans to replace the lost money by stealing and reselling music tapes, but he is chased out of the store by security when they see this. Thus, to help his friend, Billy agrees to give him the alarm code.

That night, Billy, Alf, and Clark gather near the store to attempt a break-in. To Billy’s surprise and dismay, Alf has invited Tyler. Tyler arrives with a full-grown man, whom he introduces as his cousin Rene. They enter the store through the roof hatch, and Billy goes inside to enter the alarm code. He wishes to simply take the magazine and leave, but Tyler attempts to steal much more. He claims that Mary had framed him for stealing when he worked there and that he was fired unfairly. Billy does not believe this, and he reactivates the alarm when Tyler begins breaking things in the store. The police arrive and arrest all five culprits. At the police station, Sal Zelinsky wishes to press charges against only Billy, but when the police officer says that he would have to press charges against all of them, Sal decides to press no charges at all. Billy does not understand why Sal does this.

Billy feels guilty for everything that has happened and wishes to deliver an apology note to Mary. Billy, Alf, and Clark go to St. Agatha’s School—the private high school that Mary attends—so that Billy can deliver his apology. They find Mary, but while he speaks to her, Mary goes into labor. Billy realizes that Mary was pregnant the whole time that he knew her and that he could not tell because of her heavy build. After giving birth, Mary explains that Tyler is the father. She had had a crush on him when he worked at the store, but after they had sex, she felt ashamed. She framed him for stealing so that her father would fire him. She regrets all of those decisions. She gives the baby to a kind married couple who will raise the baby. Billy and Mary are named finalists in the computer game programming contest, and though they do not win, they are approached by a renowned video game designer who wishes to have a professional relationship with Billy and Mary. Billy and Mary happily decide to continue making video games together.

More summaries and resources for teaching or studying The Impossible Fortress.