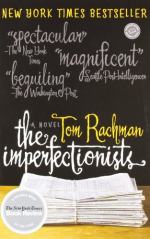 Tom Rachman
This Study Guide consists of approximately 29 pages of chapter summaries, quotes, character analysis, themes, and more - everything you need to sharpen your knowledge of The Imperfectionists.

The Imperfectionists: A Novel Summary & Study Guide includes comprehensive information and analysis to help you understand the book. This study guide contains the following sections:

This detailed literature summary also contains Topics for Discussion and a Free Quiz on The Imperfectionists: A Novel by Tom Rachman.

The Imperfectionists is the first novel by writer Tom Rachman. The novel is a collection of stories about the imperfect people who work at an unnamed international newspaper that is on the verge of shutting down. Through these stories, the reader learns about the idiosyncrasies of newspaper reporting as well as the common difficulties that each featured employee suffers in their everyday life. The Imperfectionists is a sometimes funny and often shocking look at human nature with the backdrop of the newspaper business.

Lloyd Burko is an older man who has been a newspaper reporter for more than forty years. However, Lloyd is beginning to find it difficult to make a living as most of his stories are not of a quality to be published daily. Lloyd meets with his son, who works for the French foreign ministry, and asks for a story he might write about. The son offers some information, but makes his father promise not to write about it. Lloyd does anyway only to discover the story was fictional and that his son does not actually work for the French foreign ministry anymore. In the end, Lloyd ends up confessing everything to his son and moving in with him.

Arthur Gopal is the son of a famous writer who is content to write obituaries until the day that his daughter dies in an accident. Arthur suddenly finds a passion for writing and is promoted to culture editor. Hardy Benjamin is a young and intelligent business writer who struggles in her love life. Therefore when Hardy meets an Irish man who shows just the slightest interest in her, she ignores everything unpleasant about him including the fact that he and his friends burglarized her apartment.

Herman Cohen is a grammar-aphile who is constantly driving the staff of the newspaper crazy with his bible of words not to be used in the newspaper. Herman has a good friend from childhood who he always thought would be a prize-winning writer, someone he could look up to. However, when his friend comes for a visit in Rome, Herman finally realizes he does not aspire to greatness, effectively ending the friendship.

Kathleen Solson is the editor of the newspaper. Her husband has recently engaged in an affair, causing Kathleen to consider one of her own. However, running into an old boyfriend changes her view of herself and causes her to be more content with her husband. At the same time, Winston Cheung, a professional student, tries his hand at being a foreign correspondent and discovers he does not have the killer instinct to fight off competition.

Ruby Zaga is a bitter copyeditor who feels isolated and a target of humiliation at work. Ruby expects to be fired at any time, an idea that makes her happy for the freedom she will have. However, Ruby is extremely happy when she is not fired. Craig Menzies is the second in command at the paper, therefore he is the one who does the bulk of the work. At home, Craig is ridiculously happy in his relationship with a much younger woman. However, when that woman has an affair, Craig becomes sullen and finally breaks when she shows him a rejection letter from a patent she applied for in his name. Craig asks her to leave only to attempt an apology a few hours later, only to discover her in another man's arms once more.

Ornella de Monterecchi is the paper's most devoted reader, but she reads so slowly that she is thirteen years behind. Abbey Pinnola is the paper's financial officer, known as Accounts Payable around the office. On a trip to Atlanta, Abbey has a flirtation with a copyeditor she had fired from the paper only to be humiliated when he demands to know why she chose him. Finally, Oliver Ott is the reluctant publisher of the paper his grandfather created and his father carefully maintained. Oliver has little idea what is happening at the paper until the day he is forced to announce the decision to shut the paper down. In retaliation, someone kills his dog.

More summaries and resources for teaching or studying The Imperfectionists: A Novel.

The Imperfectionists: A Novel from BookRags. (c)2022 BookRags, Inc. All rights reserved.