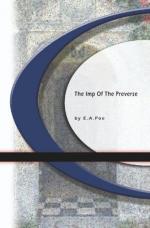 Edgar Allan Poe Writing Styles in The Imp of the Perverse

Edgar Allan Poe
This Study Guide consists of approximately 7 pages of chapter summaries, quotes, character analysis, themes, and more - everything you need to sharpen your knowledge of The Imp of the Perverse.

This is another unreliable first-person narrator, again detailing a seemingly motive-less murder. For most of this story, however, the narrator seems like a professor or an essayist.

This story is set primarily in the narrator's mind, as he spends most of the story expounding on his theories of the human mind and "perverseness."

For most of this story, Poe's narrator seems to be writing a treatise on the workings of the mind rather than a piece of fiction. Even the sentence which follows seems to be a type of thesis statement.

"In the consideration of the faculties and impulses — of the prima mobilia of the human soul, the phrenologists have failed to make room for a propensity which, although obviously existing as a radical, primitive, irreducible sentiment, has been equally overlooked by all the moralists who have preceded them." (pg. 193)

More summaries and resources for teaching or studying The Imp of the Perverse.

The Imp of the Perverse from BookRags. (c)2022 BookRags, Inc. All rights reserved.