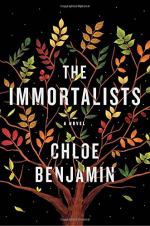 Chloe Benjamin
This Study Guide consists of approximately 59 pages of chapter summaries, quotes, character analysis, themes, and more - everything you need to sharpen your knowledge of The Immortalists.

The Immortalists Summary & Study Guide includes comprehensive information and analysis to help you understand the book. This study guide contains the following sections:

This detailed literature summary also contains Quotes and a Free Quiz on The Immortalists by Chloe Benjamin.

The following version of this book was used to create this study guide: Benjamin, Chloe. The Immortalists. New York: G.P Putnam's Sons, 2018.

The novel opens in 1969 on Manhattan's Lower East Side. The Gold Siblings, Simon, age 7, Klara, 9, Daniel, 11, and Varya, 13 go to see a fortune teller they have heard about in their neighborhood. The woman meets with each child separately and predicts the date of their deaths. Afterwards, they pretend they do not believe in the predictions, but secretly, each of them do.

Jumping forward to 1978, the Golds' father Saul dies, and Klara convinces Simon to move with her to San Francisco. She knows Simon is gay and that the fortune teller predicted he would die young, and she wants him to have a full life before his potential death at age 20. In San Francisco, Simon signs up for ballet classes and meets Robert, a handsome, older man. The two fall in love and move in together as the AIDS crisis descends upon the city. Simon continues sleeping with other men despite warnings from Robert and the community about safety, believing he is going to die soon anyway. He contracts HIV and dies in the hospital.

Klara is still grieving Simon's death in 1982 while she puts on a magic act around the city. She meets Raj, an old acquaintance from when she and Simon first arrived, and the two begin performing together as a duo. They fall in love and have a daughter named Ruby. They move to Las Vegas and get a gig opening for Siegfried and Roy at the Mirage casino, but all the while Klara is drinking heavily and believing that Simon is communicating with her from beyond the grave. On New Year's Day, 1991, the day the fortune teller predicted she would die, Klara believes Simon is calling her to meet him in the afterlife and she hangs herself in a hotel room.

The novel switches to Daniel's perspective, shortly before Thanksgiving, 2006. He is married to a woman named Mira, living in Kingston, New York, and working as a doctor at a military recruit processing center, evaluating soldiers' fitness for duty. Daniel is suspended from his job for refusing to pass enlistees that he deems unfit in order to inflate recruitment numbers. Daniel is contacted by an FBI agent named Eddie O'Donoghue who was once in love with Klara. Eddie tells Daniel that the FBI is building a case against a family of Romani immigrants called the Costellos, one of whom, Bruna Costello, is the fortune teller the Golds saw in their youth. Eddie believes a case could be made that Klara's suicide was partially a result of Bruna Costello's predictions. Daniel emails Raj and Ruby (now wealthy from performing their nationally recognized magic act) and invites them to Thanksgiving. He also searches for Bruna Costello online and finds a possible address for her in West Milton, Ohio.

At Thanksgiving, Daniel is charmed by Ruby, who tells him she wants to be a doctor too, but he quarrels with Raj, as both men blame the other for being unable to save Klara. Raj and Ruby leave, and Daniel is already depressed when he hears from Eddie O'Donoghue that the case against the Costellos is being dropped. He believes it would be symbolically significant to visit Bruna Costello and demand an apology on the day she predicted he would die. He goes to West Milton, finds Bruna Costello, and holds her at gunpoint. While he is en route, however, Mira finds the address on his computer and calls Eddie O'Donoghue. Eddie arrives at Bruna's trailer and demands Daniel put down the gun. When Daniel refuses, Eddie shoots him in the leg, accidentally hitting the femoral artery. Daniel bleeds out and dies.

In 2010, Varya (who Bruna predicted would die at age 88) is living in San Francisco and working as a biologist, conducting a life longevity study on monkeys. One group of monkeys is given adequate nutrition, while the other subsists on a calorie-restricted diet. The scientists believe the latter group will live longer. Varya is concerned because her favorite monkey, Frida, is not faring well under the experiment. Varya herself is not doing much better, paralyzed by her untreated anxiety and obsessive compulsive disorder, and still grieving her siblings. Varya has shut herself off from the world beyond her work, refusing to maintain any personal attachments, with the exception of her mother, Gertie, who she visits in a nearby retirement home.

A young journalist named Luke comes to Varya's lab to conduct an interview about her research, but after a few conversations, he admits that he is not who he says he is. Varya had a baby while she was in college and put it up for adoption; Luke is her son. Luke tells Varya that he is dismayed at the loneliness and deprivation of her life, and tells her about the adoptive brother he lost when he was a child. Luke's story and his expressions of concern for her cause Varya to reevaluate her choices. In an emotional tailspin, she goes to the lab to check on Frida, who is in isolation for self-mutilating. Varya attempts to feed Frida, breaking experiment protocol, and Frida bites her. She is subsequently asked to resign from her position at the lab, but this catharsis has allowed Varya to break free from the bonds of her mental illness. She seeks help, and connects with Robert, Simon's old boyfriend, who tells her about Simon's love of life and fearlessness. At the end of the novel, Ruby, now a med student at UCLA, comes to visit Gertie's retirement home to put on a magic show for the home's residents. Varya is less anxious and happy to be spending time with family. Before beginning the show, Ruby says the words that Raj told her Klara always said before a performance, “I love you all, I love you all, I love you all” (343).

More summaries and resources for teaching or studying The Immortalists.

The Immortalists from BookRags. (c)2022 BookRags, Inc. All rights reserved.