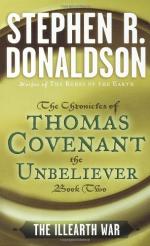 Stephen R. Donaldson
This Study Guide consists of approximately 39 pages of chapter summaries, quotes, character analysis, themes, and more - everything you need to sharpen your knowledge of The Illearth War.

This detailed literature summary also contains Topics for Discussion and a Free Quiz on The Illearth War by Stephen R. Donaldson.

The Illearth War by Stephen R. Donaldson is the second in the Thomas Covenant series. Thomas Covenant is a leper in the real world but is healed when he is called, for the second time, to the Land to fight against Lord Foul. Thomas must not only fight to stay alive but also to keep himself from going insane, since he believes the Land is nothing more than a dream and once back in reality he will have sacrificed the tools he has acquired which he needs to survive as a leper.

Thomas Covenant, a leper, is sitting at home in the real world when he is suddenly called by his ex-wife Joan. Covenant is so shocked at her call that he trips and hits his head on the coffee table. As he becomes unconscious he is transported to the Land, a magical place where Covenant has been before. Covenant is certain it must be a dream but that dreams can be dangerous. Covenant hates being in the Land because it makes him forget to live like a leper. If he forgets to live like a leper he is certain he will die slowly as other lepers have done.

Covenant's summoner to the Land is High Lord Elena, Covenant's daughter, the product of a rape that Covenant committed on his first journey into the Land. Elena has no ill feelings toward Covenant and asks him to help them save the Land from Lord Foul. There is another person there from the real world named Hile Troy. Troy was blind in the real world but has magical sight given to him by the Land. Troy is now in command of the armies that will march to save the Land.

Covenant's appearance in the Land begins a series of events that lead Covenant and Elena to a magic that Elena hopes will save the Land, the Seventh Ward. While they are on their journey to the Seventh Ward Troy finds out that the race of giants have allowed themselves to be slaughtered by one of their own because the ravers took over three giant brothers, Kinslaughter, Fleshharrower, and Satansfist. Fleshharrower is leading Lord Foul's army and chases Troy into Garroting Deep. Caerroil Wildwood protects the forests of Garroting Deep and strikes a deal that Troy will be Caerroil's eternal servant. In return Caerroil Wilwood kills Fleshharrower and the demons with him.

Covenant and Elena find the Seventh Ward, and Covenant tries to stop her from using it feeling that Lord Foul is manipulating them in some way. Elena is certain it will give them the power they need so she uses the Seventh Ward to call forth the spirit of a High Lord that did battle with Lord Foul in ages past. When she calls forth the spirit, she breaks the Law of Death and Lord Foul is able to command the spirit and send it back to kill Elena. With Elena dead Covenant goes back to hisl world. He finds he is on the floor unconscious and the phone is beeping and Joan hung up hours ago.

More summaries and resources for teaching or studying The Illearth War.