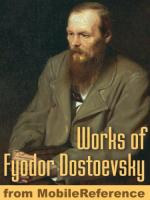 Get The Idiot from Amazon.com
View the Study Pack
View the Lesson Plans
Study Guide
Order our The Idiot Study Guide

Fyodor Dostoevsky
This Study Guide consists of approximately 48 pages of chapter summaries, quotes, character analysis, themes, and more - everything you need to sharpen your knowledge of The Idiot.

The Idiot Summary & Study Guide includes comprehensive information and analysis to help you understand the book. This study guide contains the following sections:

This detailed literature summary also contains Topics for Discussion and a Free Quiz on The Idiot by Fyodor Dostoevsky.

The Idiot, by the Russian writer Fyodor Dostoevsky, tells the tragic story of Prince Lev Nikolayevich Myshkin. The Prince is a kind, modest man and an unfortunate sufferer of epilepsy. After spending years in an insane asylum in Switzerland, he travels back to his native Russia to find his ancestors. Experiencing society for the first time, he finds himself an outsider and open to manipulation.

The novel opens with Myshkin traveling by train from Warsaw to St. Petersburg. Myshkin is an affable man and soon begins a conversation with another gentleman in his carriage named Rogozhin. From the outset, it is obvious Myshkin is exceptionally naïve. He talks freely of his time in an insane asylum and does not hold back the purpose of his trip to Russia. Rogozhin and another man, Lebedev, laugh at him, but rather than take offense, Myshkin laughs with them. Soon Rogozhin recognizes Myskin for a good-natured soul and invites him to stay at his house in St Petersburg.

Once in St Petersburg Myshkin immediately makes his way to the home of Madame Yephanchin. General Yepanchin receives him cordially and says he can help him out. As the prince works on an example of his excellent handwriting, the General talks to his assistant Ganja about Nastassya Filippovna. Ganja pulls out a photo of her, getting the attention of the Prince. The Prince thinks she is the most beautiful woman he has ever seen.

The general introduces Prince Myshkin to his wife. He tells Madam Yepanchin that the Prince is simple, but once he leaves, Madam Yephanchin takes to the Prince immediately. As in his previous meetings, the Prince talks about his past and even laughs along when he his being laughed at. The Prince tells the woman about Nastassya Filippovna's photograph in her husband's study, and Madam Yephanchin demands to see it, saying her husband is keeping something from her. The Prince brings the photograph and immediately Madam Yephanchin demands to see Ganja. When he arrives, he denies that he is arranging to marry Nastassya Filippovna.

Ganja invites the Prince to stay at his house. On the way, Ganja accuses him of gossiping and tells the Prince he is an idiot. The Prince becomes so angry that Ganja apologizes and they continue onto his house. At the house Ganja and his family argue about his impending marriage to Nastassya Filippovna. Feeling uncomfortable, the Prince leaves the room. As he walks into the hallway Nastassya Filippovna knocks on the door. Her presence causes great unease, particularly when Ganja realizes he now has to explain the situation to his father. Just as he is leading his father to another room, the doorbell again rings. This time it is Rogozin. Rogozhin claims he is in love with Nastassya and attempts to win her with 18,000 roubles. Ganja's sister Varvara calls Anatasia Filippovna shameless. Ganja attacks his sister, but the Prince hold him back. Ganja turns and strikes the Prince across the face. Later with every one gone Ganja apologizes. He confides he is only marrying Nastassya for money.

Prince Myshkin decides to warn Nastassya about Ganja's intentions. When the Prince arrives at her house, she is holding a party. The other guests show their displeasure at him arriving uninvited, Nastassya Filippovna is delighted. She enlivens the atmosphere with a party game involving the men describing the worst thing they have done in their life. After the game, she asks the Prince if she should marry Ganja. The Prince says no.

Rogozhin enters the party with his friends and throws 100,000 roubles on the table. He says the money is Natassya's if she agrees to marry him. The Prince quickly declares his own love for Natassya. She questions whether he can provide for her, and he shows everyone a letter proving he is about to inherit a huge sum of money. Initially Natassya says she will marry him but then changes her mind and decides to leave with Rogozhin. Before she goes she grabs the 100,000 roubles and throws the money on the fire, saying anyone who risks their skin to retrieve it can keep it. She leaves with Rogozhin and the prince sets off in pursuit.

The Prince goes to Moscow to accept his inheritance. He goes back to St Petersburg 6 months later in June. On the railway platform, he feels a pair of eyes staring at him through the crowd, but when he turns to see who it is, they have disappeared. The Prince continues to Lebedev's house. He asks him if he knows the whereabouts of Natassya. Lebedyev says she is likely to be staying at a summerhouse in Pavlovsk. The Prince asks Lebedev if he can rent his apartment in Pavlovsk from him and Lebedev accepts the offer.

Myshkin visits Rogozhin. They became close during Myshkin's time in Moscow and refer to each other as brother. The conversation soon turns to Nastassya, and Rogozhin tells the Prince she left him on his wedding day. Myshkin says she cannot live with Rogozhin because of his paranoia, but Rogozhin tells him the reason is that she is love with the prince. They talk about religion and swap crosses, and Rogozhin says he has given up on Nastassya and the Prince can have her.

The Prince feels unwell and knows he is on the verge of a seizure. He wanders back to his hotel. As he walks up the stairs, Rogozhin appears with a knife, intent on killing him. However, the Prince has an epileptic seizure and falls down the steps. Ganja's younger brother Koyla recognizes the Prince and takes him to Lebedev. Lebedev says the Prince needs rest and the three of them travel to Pavlovsk.

Initially Lebedev is protective over the Prince, but eventually allows him visitors. The Yephanchins are the first to come. A number of other people follow, including Keller, Burdovsky and Hippolite. Burdovsky claims the Prince has cheated him out of his inheritance. In their company Koyla reads an article about the Prince, which slanders his good name. The Prince is upset about the article. He tells Burdovsky he is not entitled to the inheritance, but because he has genuinely been tricked, he will give him 10,000 roubles. Burdovsky is angry at the Prince's offer and gives the money back.

As the guests leave, Nastassya's carriage pulls up outside. She tells Aglaya's suitor Radomsky he owes her money. Radomsky denies any knowledge of the IOUs, and no one can work out why she said it, suspecting something underhand is going on. Madam Yepanchin visits the Prince to ask why he wrote a letter to Aglaya. She wants to know if the Prince is love with Aglaya. The Prince says he looks upon Aglaya as a sister. In reply Madam Yephanchin says he will never marry her daughter.

Madam Yephanchin receives a letter stating Aglaya is in correspondence with Nastassya Filippovna. The information enrages her, and she demands to know exactly what is happening. The Prince arrives at the Yepanchin's house, and Aglaya claims he is the only person in the room worth anything. Later on, she proclaims she will not marry the Prince, and the rest of the room laugh at her remark. Now in a jovial mood, they decide to visit the park. At the park, the Prince sees Nastassya walking towards the group. Again, she approaches Radomsky and speaks to him as if they were acquainted. Later on, Myshkin meets Rogozhin. Rogozhin tells the Prince that Natassya is trying to marry him off to Aglaya.

The Prince meets Aglaya in the park. She accuses him of being in love with her, but the Prince denies it. In return, Aglaya says she is in love with Ganja and that the previous day Ganja had burnt his hand as a mark of his love. The Prince tells her she is lying because he has seen Ganja and his hand is fine. Madam Yephanchin approaches the couple and Aglaya runs away. In a reflective frame of mind, the Prince goes on another walk in the park and meets Nastassya. She asks if he is happy, but before he can answer, she disappears. Rogozhin then approaches and tells the Prince they are heading back to Moscow.

The Prince declares his love for Aglaya, but she tells him he is an idiot. She claims she can never marry someone like that. At the same time everyone knows she is lying, and Madam Yephanchin decides if it is her daughter's fate to marry the Myshkin, then so be it. The Yephanchins invite the Prince over to meet some important people. At the gathering the Prince initially says nothing, but they all arouse his interest when they chat about Catholicism. The Prince goes on a harangue about how Catholicism is bad before having a seizure. The company leave the Yephanchins saying they do not think an ill man such as the Prince is suitable for Aglaya.

Aglaya arranges a meeting with Natassya and invites the Prince along. The two women hate each other and argue bitterly. Nastassya claims she only has to say the word and the Prince will marry her. The two women look at the Prince to see if it is true and his hesitant reply sends Aglaya running from the house. He is about to run after her when Nastassya faints in his arms. After the event, the Prince stays with Natassya, and they arrange to get married.

On the day of the wedding, Nastassya sees Rogozhin among the guests and asks him to save her. Rogozhin immediately takes her to St. Petersburg. Upon hearing the news, the Prince follows them to the city. Myshkin goes to the same hotel where Rogozhin tried to stab him, presuming Rogozhin will come to find him. His presumption proves right and Rogozhin takes the Prince back to his house and up to his bedroom. On the bed behind a curtain, Nastassya Filippovna lies stabbed to death. The Prince and Rogozhin stay with her body until morning. When the police enter the house they find the Prince and Rogozhin in a state of delirium. The Prince is admitted to an insane asylum and the courts sentence Rogozhin to 15 years in Siberia.

More summaries and resources for teaching or studying The Idiot.

The Idiot from BookRags. (c)2022 BookRags, Inc. All rights reserved.