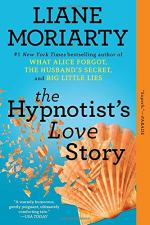 Liane Moriarty
This Study Guide consists of approximately 37 pages of chapter summaries, quotes, character analysis, themes, and more - everything you need to sharpen your knowledge of The Hypnotist's Love Story.

This detailed literature summary also contains Quotes and a Free Quiz on The Hypnotist's Love Story by Liane Moriarty .

In A Hypnotist's Love Story, by Liane Moriarty, a woman named Ellen O’Farrell who lives in Sydney, Australia, works as a hypnotherapist in her beach house. The 35-year-old has a couple of good friends, but she has not found a husband. This is a source of anxiety for her because she really wants to be married and have children. Ellen is an only child who was raised by her physician mother. Consequently, she wants what a family can bring to a person's life. When Ellen meets a man named Patrick Scott, a widower with a young son named Jack, they hit it off. Before long, Ellen is pregnant. Patrick proposes to her.

There is a complication in their lives, however, as Patrick reveals that his ex-girlfriend, Saskia Brown, has been stalking him for a long time. Ellen is not aware that Saskia, using the name Deborah Vandenberg, has become one of Ellen's clients. Saskia continues to stalk the couple and even ends up at the island location where Patrick proposes to Ellen. Patrick and Jack move into Ellen's house, and Saskia continues to follow them around. One night, Ellen and Patrick wake to find Saskia standing at the foot of their bed. They order her out of the house, but chaos ensues when Jack sees Saskia and the two of them fall down the stairs. Jack's arm is broken, but Saskia's pelvis is broken, forcing her into an extended hospital stay. This provides some relief for Patrick and Ellen because they know Saskia is no longer a threat.

Saskia has time to examine her life and decides to change. She also makes new friends and begins to put her old ways behind her. Basically, Saskia had functioned as Jack's mother when she was with Patrick after the death of Patrick's wife, and Saskia desperately misses the boy. Her grief propelled her into her obsessive behavior, but she is recovering and moving on. Patrick and Ellen welcome a baby daughter to their family, and their lives are in place to move forward peacefully.

More summaries and resources for teaching or studying The Hypnotist's Love Story.