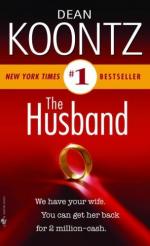 Dean Koontz
This Study Guide consists of approximately 39 pages of chapter summaries, quotes, character analysis, themes, and more - everything you need to sharpen your knowledge of The Husband.

The Husband Summary & Study Guide includes comprehensive information and analysis to help you understand the book. This study guide contains the following sections:

This detailed literature summary also contains Topics for Discussion and a Free Quiz on The Husband by Dean Koontz.

The Husband by Dean Koontz is an exciting drama that tests one man's devotion to his wife. Mitch Rafferty is just a gardener, a simple guy who has never hurt anyone. However, someone wants to hurt Mitch. Mitch has just received a phone call telling him that his wife has been kidnapped and he has sixty hours to come up with two million dollars. This phone call starts Mitch and the reader off on an adventure that is full of surprising twists and the emotional rollercoaster that faithful Koontz readers have come to expect.

Mitch is working at his landscaping job when he receives a phone call. The caller claims to have kidnapped Mitch's wife, Holly. To prove it is not a joke the kidnappers shoot a man who is walking his dog across the street. Frightened, Mitch waits impatiently for the police to allow him to go. One of the detectives, Taggart, seems interested in Mitch. However, the police finally allow him to go. After dropping off his employee, Mitch rushes home, afraid of what he will find.

Confirming Mitch's worse fears, he finds blood all over the kitchen where Holly was clearly overtaken by her captors. Moments later the phone rings. Holly is on the other end, making Mitch promise that no matter what happens he will go on with his life. The kidnapper comes on a moment later and gives Mitch instructions, warning him that if he does not follow their rules they will kill Holly. The kidnappers have planted evidence around the house so that if Holly is killed, it will look as though Mitch committed the crime. Mitch has little choice but to follow the rules.

Mitch showers and is about to leave the house as instructed when Taggart knocks on the door. It turns out the dog walker is a man Mitch once shared an apartment with. Mitch assures Taggart that he has not seen this man in years and had no idea he was the victim. Taggart seems to think Mitch is hiding something, but he leaves anyway.

Mitch goes out to the garage to get his wife's car. When Mitch enters the garage, it occurs to him that the kidnappers, who have clearly been watching him, might have a surveillance post in the garage. Mitch starts the car and then sneaks up into the second story where there is storage space. There Mitch finds surveillance equipment. Before Mitch can do anything, he is overtaken by a strange man. The man begins to walk Mitch back downstairs but trips and falls, falling through the guardrail and onto the garage floor below. The man is dead.

Mitch, afraid of the repercussions for Holly should the kidnappers find their partner dead, puts the body in the trunk of his car. Mitch then drives to his parents' home. Mitch is hoping to see his mother, but is forced to spend several minutes speaking to his father. Mitch's parents were cruel to their children and Mitch finds it difficult to deal with his father now due to this cruelty. However, Mitch believes this might be the last time he will see his father, so he endures the visit.

Mitch leaves his father's home and drives to a church. Here Mitch receives another call from the kidnappers on his cell phone. Mitch is told to go to his brother's house. Mitch does as he is told. Once there the kidnappers call again and give Mitch's brother, Anson, instructions. Anson tells Mitch that the kidnappers want Anson to provide the two million dollar ransom. Anson has agreed. However, Anson wants Mitch to go talk to an ex-FBI friend of his to discuss their options. This friend turns out not to be FBI, however, but one of Anson's many illegal contacts.

Anson turns on his brother and leaves him with Campbell, his friend, to be killed. Mitch is taken to the desert, but manages to overcome his killers. Mitch returns to Anson's condo and takes him hostage, forcing him to tell Mitch where his money is so Mitch can pay the ransom. Mitch then arranges with the kidnapper to make an exchange. Mitch has trouble getting to the exchange, but finally arrives ready to fight. Mitch shoots the kidnapper when Holly distracts him and runs, but the kidnapper is wearing a bulletproof vest and able to continue fighting. Mitch shoots him again, finally killing the kidnapper and rescuing his wife.

More summaries and resources for teaching or studying The Husband.

The Husband from BookRags. (c)2022 BookRags, Inc. All rights reserved.