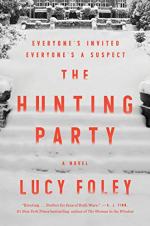 Lucy Foley
This Study Guide consists of approximately 59 pages of chapter summaries, quotes, character analysis, themes, and more - everything you need to sharpen your knowledge of The Hunting Party.

This detailed literature summary also contains Quotes and a Free Quiz on The Hunting Party by Lucy Foley.

A group of adults, with a core group who have been friends since college, set out to the Scottish Highlands for the New Year's holiday. Emma, a relative newcomer who has been part of the group since becoming Mark's girlfriend three years earlier, has planned every detail. Mark has always had a crush on Miranda, who is attending with her husband, Julien. Katie and Miranda have been friends since they were very young. Katie is the only one attending without a partner. Nick is closer to Katie than anyone of the others, and Nick is attending with his boyfriend Bo. Katie and Miranda were roommates with Samira, who is attending with her husband Giles and their infant daughter. The nine had expected to have the run of the lodge, but they discover there are two additional guests, a couple from Iceland. The lodge is staffed by Heather and Doug who live on the grounds and Iain, a local man who lives in the nearest village.

While the nine members of Emma's group have been bringing the New Year in together since college, things are beginning to change. Samira is wrapped up in caring for her newborn and Miranda seems to resent the baby's presence. She has been trying to get pregnant with no success, just one of the problems in her marriage that seems so perfect from the outside. Emma and Miranda have been spending a lot of time together because Katie and Samira are no longer available when Miranda calls. Katie claims to be busy with work but also admits that she has been a bad friend in other ways. Miranda discovers just how bad when she walks into the sauna room to find Julien and Katie naked together. Miranda suddenly realizes that the paunch in Katie's middle is not because of overeating during the Christmas holiday, but is because she is pregnant. In her fury, Miranda tells Julien she is going to turn him in for insider trading. She has been keeping that secret for awhile and is willing to accept whatever consequences come with not turning him in sooner.

Then Miranda goes missing and there is a lengthy list of suspects. Julien and Katie are possibilities, of course. Miranda had sex with Giles while they were in college and he is worried about Samira's reaction if she finds out. Miranda has been mean to everyone, including Nick and Bo. Mark has always had a crush on her and there was a brief, violent encounter after Mark groped Miranda. And then there is the lodge staff. Doug served time in jail after choking a man who provoked him and he suffers from fugue blackouts. Heather is a pretty young woman, and what could make someone like her drop out of society. Then there is Iain, the man who lives nearby but who did not leave the estate grounds on New Year's Eve as he said it did.

As Miranda grapples with the reality that her husband is having a baby with the woman she considered her best friend, she turns to Emma in her cottage. Emma tries to get Miranda to take their conversation back to the lodge and in a matter of minutes, Miranda discovers that Emma has been stalking her for more than a decade. Miranda has had a lot to drink and she plans to run all the way back to the train station, but she slows down when she sees Iain. Emma catches up with her, chokes her and pushes her off a bridge to her death.

Back at the lodge, the investigation continues. Heather follows a set of clues of her own and discovers that Iain is moving drugs through the estate with the full knowledge of the absent laird. Meanwhile, there is a final confrontation between Emma and Katie. Emma blames Katie for her argument with Miranda. She says that Miranda was only upset because she learned that Katie and Julien were having an affair. Emma intends to kill Katie and fires off a shot just as Heather knocks Katie to the ground. As the novel comes to an end, Katie realizes that she should have followed her instinct to put aside those old friendships and make new ones. She knows she will have to have contact with Julien as the father of her child, but she is ready to move into the next phase of her life. Heather also realizes that she has been hiding from people who love her and is ready to again face the world.

More summaries and resources for teaching or studying The Hunting Party.