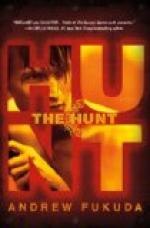 Get The Hunt from Amazon.com
View the Study Pack
Study Guide
Order our The Hunt Study Guide

Andrew Fukuda
This Study Guide consists of approximately 21 pages of chapter summaries, quotes, character analysis, themes, and more - everything you need to sharpen your knowledge of The Hunt.

The Hunt Summary & Study Guide includes comprehensive information and analysis to help you understand the book. This study guide contains the following sections:

This detailed literature summary also contains Topics for Discussion on The Hunt by Andrew Fukuda.

The Hunt is a novel by author Andrew Fukuda, who was selected by Booklist in 2010 as a Top Ten First Novel and Editors' Choice for the Best Adult Book for Young Adults for his first novel, Crossing. The story follows the main character, Gene, as he tries to survive as the only human left living in a world full of vampires. Prior to Gene's father leaving Gene behind, because a vampire bit him, his father taught Gene all of the lessons he needs in life to survive.

As if Gene hiding in plain sight among vampires is not hard enough, Gene's number comes up in the lottery for an upcoming Heper Hunt. Gene's winning ticket whisks him off to the Heper Institute, where he trains as a vampire among other vampires to hunt down and kill the hepers that the Heper Institute has in captivity. While Gene continues to try to hide his true identity, he also forms relationships and special bonds with the Hepers that are in captivity. Since Gene has never been around other humans before, he learns that they are not the dumb and savage beasts that the vampires make hepers out to be.

Gene also learns that the girl of his dreams, Ashley June, is a heper as well. The two form an alliance to save themselves. Ashley June ends up sacrificing her own life and well-being to save Gene, so in turn Gene can save the hepers. Ultimately, Gene and the hepers arrive in a land where the vampires cannot reach them. This is when Gene learns the truth about the biggest secret of them all—that his father was a Scientist who previously worked at the Heper Insititute and left clues behind that allowed Gene to escort the hepers to safety.

More summaries and resources for teaching or studying The Hunt.

The Hunt from Gale. ©2005-2006 Thomson Gale, a part of the Thomson Corporation. All rights reserved.