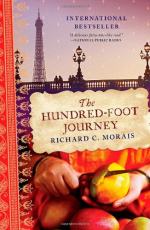 This detailed literature summary also contains Quotes and a Free Quiz on The Hundred-Foot Journey by Richard C Morais.

The Hundred-Foot Journey by Richard C. Morais is the story of Hassan Haji who rises from the slums of West Bombay to become one of the elite chefs of Paris. Hassan was the second-born in his family. He was close to both of his parents. The family lived in a poverty-stricken area above Hassan's grandfather’s restaurant. Eventually, his grandfather moved the restaurant into a nicer middle-class neighborhood.

Abbas, his father, was actively involved in Hassan's grandfather's restaurant. Hassan's mother kept the restaurant's books because she was good with numbers. After Hassan’s grandfather died, Abbas took over the operation. Unlike his father, Abbas stopped hiring boys from the slum which hurt and enraged the people of the old neighborhood. One day, the restaurant was attacked by protestors who set fire to the building. Unfortunately, Hassan’s mother couldn’t escape and died from her injuries. The family mourned deeply.

Abbas decided that the family needed a new start and moved them to London. They felt comfortable in Southall because there were a lot of Indian, Pakistani, and Bangladeshi transplants in the area. Abbas had made a small fortune when he sold his restaurant in West Bombay. He decided to go into a business in London. But, when that fell through, he decided to take the family on an extended European vacation. Abbas tried to keep busy to overcome the thoughts of his wife's death.

While they were on vacation, their car broke down in Lumiere, a small village in France. The break down happened in front of an old mansion that was for sale. After learning that there was no Indian restaurant in the village, Abbas bought the house with plans to redesign part of it mansion as a restaurant. Abbas was unaware that directly across the road from the old mansion was a famous restaurant and inn named Le Saule Pleureur. It was run by celebrated master chef Madame Gertrude Mallory.

Mallory was a sharp-tongued recluse who was obsessed with only one thing in life – her restaurant and earning a three-star rating from the prestigious Michelin board of directors. She was outraged when Abbas, who was loud and boisterous, began building his restaurant. Though Abbas had every right to open his restaurant, Madame Mallory tried to have it shut down. The two restaurateurs became bitter enemies which culminated in a physical altercation in which Hassan was badly burned.

The incident made Mallory take stock of her own self. When she discovered that Hassan had exceptional culinary skills, she decided to take him under her wing and teach him French cooking. At first Abbas was totally against it. He didn’t want his son to be around her. But, Mallory was so insistent that she waged a hunger strike on his driveway. Finally, Abbas gave in because Hassan wanted to study under a master chef.

After several years of studying with Mallory, Hassan was offered a position in Paris. His mentor told him that it was time to move on because she had taught him everything she knew. Eventually, Hassan opened his own restaurant and became part of the circle of elite chefs in France.