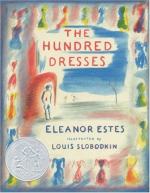 Eleanor Estes
This Study Guide consists of approximately 31 pages of chapter summaries, quotes, character analysis, themes, and more - everything you need to sharpen your knowledge of The Hundred Dresses.

This detailed literature summary also contains Quotes and a Free Quiz on The Hundred Dresses by Eleanor Estes.

In “The Hundred Dresses,” Wanda Petronski, in the hope of fitting in with the other girls of her class, claims to have one hundred dresses at home, though she wears the same faded dress to school every day. Several of the girls begin to tease Wanda about her claim until Wanda turns in a hundred drawings of beautiful dresses. Maddie, one of the girls in the class, feels guilty because she never stood up for Wanda and that guilt is multiplied when she learns Wanda has moved away because of how she was treated.

Wanda Petronski is the new girl in Room 13. Peggy is the most popular girl in the class and Maddie is her best friend. Wanda lives in a poor neighborhood with her father and brother. She doesn't have a mother. Wanda is not readily accepted into the groups of friends and she doesn't seem to really know how to fit it. She wears the same faded blue dress to school every day. It doesn't fit well but it's always clean.

One day, a student named Cecile arrives with a new crimson dress. Everyone is admiring the new dress. Wanda stops and becomes part of the group of girls. She shyly whispers to Peggy that she has 100 dresses lined up in her closet at home. Peggy immediately seizes on the statement and laughs at Wanda. The other girls follow her lead. They ask why she never wears any of them to school and she explains that they are party dresses. Soon, most of the girls are teasing Wanda and laughing about her 100 dresses.

Maddie doesn't laugh and she knows she should step up and say something to stop the teasing. But Maddie is poor herself and she's afraid that the other girls will make fun of her if she says anything. She doesn't object and the teasing goes on for days. Sometimes the girls tease Wanda on the school yard. Sometimes Peggy waits for Wanda at the corner of Olive Street and begins the teasing before they ever even reach the school.

Meanwhile, the lessons go on. Wanda sits in a corner of Room 13 where most of the noisy boys sit. Most of the students in that corner don't get good grades and there is usually mud on the floor, tracked in by the students who walk to school from the country.

One day, Miss Mason announces that it's time for the annual drawing contest. The girls are to draw a dress and the boys are to draw a motorboat. One boy and one girl will be chosen as winner of the contest. When it's time to turn in the drawings, the children are amazed to find that Wanda has turned in 100 drawings. Each is a beautiful dress and it's obvious this is the 100 dresses she claimed were lined up in her closet at home. Everyone agrees that she is a talented artist and it's no surprise when she wins the prize.

But Wanda isn't at school to collect her prize or to receive her congratulations. She has been absent for a couple of days by this time. Miss Mason reads a letter from Wanda's father, Jan Petronski, who says he is tired of his children being teased. He says people have made fun of them, including their name, and that he's moving them to a larger city where he hopes their name won't stand out so much. Miss Mason says she can't imagine that any of the students in her class teased Wanda.

Maddie and Peggy feel guilty that they played a role in making Wanda's life so miserable that her family moved. They go into the neighborhood where Wanda lived but find the house is already vacant. They write Wanda a letter, intending to apologize, but they wind up just writing a friendly letter. At the Christmas party, Miss Mason reads a letter from Wanda. She says she wants to give a specific drawing to Maddie and another to Peggy. Maddie later realizes that the girls wearing the dresses resemble Maddie and Peggy.

Peggy accepts the drawing and the letter as signs that everything is alright with Wanda and she moves on. Maddie, however, continues to deal with the guilt that she didn't speak up for someone who became so unhappy that the family moved to escape the situation.

More summaries and resources for teaching or studying The Hundred Dresses.