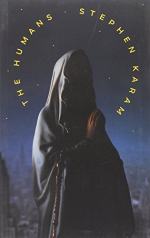 Stephen Karam
This Study Guide consists of approximately 52 pages of chapter summaries, quotes, character analysis, themes, and more - everything you need to sharpen your knowledge of The Humans.

The Humans Summary & Study Guide includes comprehensive information and analysis to help you understand the book. This study guide contains the following sections:

This detailed literature summary also contains Quotes and a Free Quiz on The Humans by Stephen Karam.

The play “…takes place in one real-time scene – on a two-level, four-room set – with no blackouts. Life continues in all spaces at all times. While this is difficult to render on the page, the noting of ‘upstairs’ v. ‘downstairs’ is a reminder of the exposed ‘dollhouse’ view the audience has at all times. Throughout the journey, the audience’s focus may wander into whichever room it chooses” (Introductory Notes). There are several points in the narrative at which silent reactions are described in detail: these moments are indicated by square brackets []. The action of the play is continuous, and takes place in real time: there are no scene breaks, and no intermission.

The play begins just after the arrival of the elder members of the Blake family (father Erik, mother Deirdre, Erik’s mother Momo) at the two-story home of younger daughter Brigid, which she shares with her boyfriend Richard. Also present is elder daughter Aimee, who has just suffered the break-up of a long-term lesbian relationship. As the family gets settled, they all struggle to cope with sudden, unexpected noises from upstairs; with tricky cell phone reception; and the unpredictable, dementia-triggered outbursts of Momo, who is in a wheelchair.

Conversation hints frequently at something uncomfortable that Deirdre and Erik have to share with the younger generation; at Aimee’s lingering unhappiness after the breakup; and at Deirdre’s unhappiness with the fact that Brigid and Richard are not married. Meanwhile, Richard puts the finishing touches on the meal; everyone consumes alcoholic beverages; and Erik becomes increasingly attentive to what he seems to see as suspicious activity outside the flat.

Over the course of the evening, and as more food and alcohol are consumed, tensions begin to deepen even as years-old family rituals around Thanksgiving are enacted. There are barbed exchanges of challenge and confrontation between Deirdre and Brigid over Deirdre’s eating habits and religious faith; similarly barbed exchanges between hard-working Erik and trust-fund baby Richard; increasingly violent (and metaphoric) eruptions of verbal jumble from Momo; and repeated attempts by Aimee to contact her ex-girlfriend. There are also conversations in which both Erik and Richard reveal dreams that have been troubling them recently. Throughout all this, and one by one, the lights in the apartment go out – first the light in the upstairs part of the house, then the light over the staircase linking the two levels. There are also increasingly invasive, and increasingly unpleasant, sounds from outside the apartment.

Eventually, in the aftermath of the main course of dinner being finished, Erik reveals the secret that he and Deirdre have been keeping: he has recently been fired from his job at a Catholic school because of an affair he had with another member of the staff. As Brigid and Aimee fret about what is going to happen to Erik and Deirdre, Erik tries to reassure them that everything will be fine. Meanwhile, Momo becomes increasingly agitated, Deirdre becomes increasingly tearful, and Richard becomes increasingly withdrawn.

As the play concludes, the family prepares to leave. Erik is left alone in the apartment and is startled by yet more loud noises. He manages to find his way out, however, leaving the darkness and exiting into a hallway filled with light.

More summaries and resources for teaching or studying The Humans.

The Humans from BookRags. (c)2022 BookRags, Inc. All rights reserved.