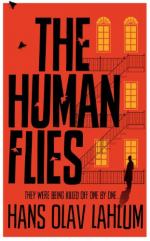 Hans Olav Lahlum
This Study Guide consists of approximately 55 pages of chapter summaries, quotes, character analysis, themes, and more - everything you need to sharpen your knowledge of The Human Flies.

This detailed literature summary also contains Quotes and a Free Quiz on The Human Flies by Hans Olav Lahlum.

“The Human Flies” is an historical detective novel by Hans Olav Lahlum, and is the first of his “K2 and Patricia Series”, which focuses on the efforts of Norwegian Inspector Detective Kolbein “K2” Kristiansen and his brilliant young amateur assistant, Patricia, to solve a murder. On April 4, 1968, K2 is called to 25 Kreb’s Street where the body of Harald Olesen, a national hero and Resistance fighter during World War II, has been found dead in his locked flat. K2 begins his investigation, believing the murderer to be among the other residents in the building. He meets them all. There is Randi, wife of the hospitalized superintendent, Anton; there are Kristian and Karen Lund, a young married couple with a son; there is the stunningly gorgeous blonde Swedish student Sara Sunqvist; there is wheelchair-bound Andreas Gullestad; an American diplomat named Darrell Williams; and an ex-Nazi named Konrad Jensen.

K2’s initial interviews yield relatively little information. The motive, murderer, and murder weapon are all unknown. How the killer got in and out of Olesen’s apartment without being seen is also unknown, given the sound of a gunshot seconds before residents responded to the sound. K2 is contacted out of the blue by Ragnar Borchmann, an old family friend, who entreats K2 to meet with his brilliant, wheelchair-bound daughter, the 18-year-old Patricia. Patricia reveals a knack for reason, logic, and good mystery stories, so she wants to help K2 with his work. K2 is skeptical at first, but Patricia’s insights and assistance help lead to major breakthroughs in the case.

It is revealed, ultimately, that all residents of 25 Krebs’ are human flies. A “human fly” is a term of Patricia’s own coining, which refers to a person who cannot get past a tragedy in life, causing them to dwell on that tragedy the way flies circle a rotting corpse. Randi is deeply in debt due to her husband’s alcoholism brought about by traumatic experiences during World War II, when he worked with Olesen to help refugees escape. Sara Sundqvist, then a baby, and her parents were among those refugees helped. Her parents ultimately disappeared, leading her to be adopted after she was taken to safety in Sweden. Kristian is the illegitimate son of Olesen, conceived with a Nazi party official that Olesen cheated on his wife with. Andreas Gullestad reveals his own father was arrested and executed during the war, and a subsequent hit-and-run left him paralyzed in a wheelchair. Darrell Williams explains he fell in love with Olesen’s niece while working for the American OSS during the war, but the relationship was ended by Olesen. Konrad Jensen has been forced to live his life in shame, running from his past as a Nazi where he worked for six months as a driver. Since then, he has largely been able to escape his past. Things are complicated when Konrad is found dead with an apparent written confession to the murder.

K2 and Patricia realize that each of the residents have something in common with, or a reason to kill Olesen. The discovery of Olesen’s diary, which reveals panicked meetings, payoffs, and confrontations with the ghosts of his past mean that anyone in the building may have a motive for murder. But as K2 and Patricia gather evidence and apply reason to the case, they realize the killer was Olesen’s wartime partner and guide in the mountains helping refugees to escape. The killer is Andreas, who has been faking his injury long after it has healed. K2 and Patricia confront Andreas, who confesses. Andreas went by the codename “Deerfoot” during the war. While escorting the baby Sara and her parents over into Sweden during the war, a team of Germans and a bad snowstorm closed in on them. In desperation, Sara’s father began to argue with Olesen, who shot him. When Sara’s mother went after Olesen, the then-teenaged Andreas reacted by shooting Sara’s mother. He then had to kill three Germans, and bring Sara to safety in Sweden because Olesen was too stunned to move. The incident has eaten away at Andreas all his life. Wanting to keep his own role in Sara’s mother’s death a secret, Andreas killed Olesen to prevent him from telling Sara, then killed Konrad to cover his own tracks. Andreas is arrested, and kills himself in jail by taking a poison capsule.

K2 and Patricia are happy to have solved the case. Patricia confesses that her true reason for helping K2 is that she wanted to prove she could make a difference in the world despite her handicap. She believes she is inadequate, but K2 assures her that she is not. Patricia explains she will be happy to help K2 on future cases, but that she does not want to have to go out into the world to help him.

More summaries and resources for teaching or studying The Human Flies.