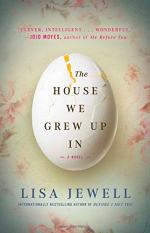 The House We Grew Up In Symbols & Objects

Eggs have long been associated with spring and resurrection, which is why they are common in Easter celebrations. Here, eggs are used similarly and foreshadow a rebirth of the Bird family after being torn apart.

Rainbows are commonly used in present culture as a symbol of gay pride. Lorelei makes a special point to her children about the rainbow on Easter. This symbolizes the lesbian relationship she will eventually become involved in with Vicky.

Rhys hangs himself. In doing so, the noose symbolizes the hold his suicide has on the family. Similarly, it symbolizes how Lorelei’s hoarding is strangling the house she lives in.

Over time, Rory ends up with many tattoos, almost as though he is collecting them. The tattoos symbolize Lorelei’s hoarding and how Rhys’ suicide has left an indelible mark on him.

Much is referenced about Lorelei...

The House We Grew Up In from BookRags. (c)2022 BookRags, Inc. All rights reserved.