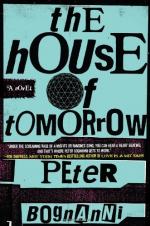 Peter Bognanni
This Study Guide consists of approximately 32 pages of chapter summaries, quotes, character analysis, themes, and more - everything you need to sharpen your knowledge of The House of Tomorrow.

The House of Tomorrow Summary & Study Guide includes comprehensive information and analysis to help you understand the book. This study guide contains the following sections:

This detailed literature summary also contains Quotes and a Free Quiz on The House of Tomorrow by Peter Bognanni.

This guide was created using the following version of this text: Bognanni, Peter. The House of Tomorrow. New York: Berkley Books, 2010. Print.

The novel opens with a boy, Sebastian, who lives in a dome-like house with his grandmother, Nana. Sebastian moved in with his grandmother after his parents died in a small plane crash 10 years earlier. One day, a woman, Janice, and her son, Jared, arrive at the dome and request a tour of their home. During the tutor, Nana collapses. Janice calls 911 and Nana is rushed to the hospital. Here, Sebastian learns that Nana suffered a stroke. During her hospital stay, Jared and Sebastian get to know each other and Jared introduces Sebastian to punk rock music.

After Nana is released from the hospital, Jared makes a few secret trips to Sebastian’s home. During these visits, Sebastian learns that Jared is the recipient of a heart-transplant, causing him to have an attitude of living to the fullest. Sebastian also becomes enamored with Jared’s sister, Meredith, who seems to entertain many male guests. Eventually, the two decide to start a band and steal a bass guitar from the closet of Janice and Jared’s church when the family brings Sebastian to youth group. Around this time, Nana decides to stop giving tours of the dome. She instead embarks on a new project of painting it like a globe. However, after the dome gets some press attention, the press mocks the project and Nana. Thinking that this was sabotage by Sebastian, Nana kicks him out of the house, as he has betrayed his path of continuing what Nana’s idol, a utopian-visionary named Bucky started.

After riding his bike to a diner, Sebastian calls Janice, who picks him up and allows him to live in their home. While Sebastian stays with the family, Jared and Sebastian decide to name their band The Rash and to play at the church’s annual talent show. As the two slowly become a better band, Sebastian and Meredith become close, as Meredith believes that Sebastian is the only male who has ever tried to listen to her. During his stay, Sebastian also learns that Jared’s father became distant after Jared fell ill, but is still trying to contact him, but is blocked by Janice. Later, Jared has an organ rejection episode after he decides to stop taking his medicine. He is rushed to the hospital and agrees to take his medicine. Janice then bars the two from playing the talent show because she is scared for Jared’s health. After some convincing Janice allows them to play. After some flyer-based publicity is done, the two play the show, which is attended by some rowdy punk rock fans. During the show, Janice appears, and Sebastian learns that Nana is sick but will not go to the hospital.

The group then goes back to Sebastian’s dome and Nana apologizes for her previous behavior. The two decide that Sebastian is to move back into the dome, while Janice decides that Sebastian will return to school. Sebastian and Jared part, vowing to continue being friends.

More summaries and resources for teaching or studying The House of Tomorrow.

The House of Tomorrow from BookRags. (c)2022 BookRags, Inc. All rights reserved.