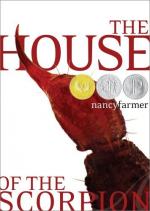 The House of the Scorpion Setting & Symbolism

Nancy Farmer
This Study Guide consists of approximately 57 pages of chapter summaries, quotes, character analysis, themes, and more - everything you need to sharpen your knowledge of The House of the Scorpion.

Opium is the main setting of The House of the Scorpion. It is the land between what used to be Mexico and the U. S., but it is now bordered by the U. S. and Atzlan. The country is run by El Patron who controls the opium empire, planting his fields with poppy and using eejits to harvest the narcotic. When Matt finally reaches the Convent of Santa Clara after El Patron's death, Esperanza promises to establish Matt as the new Master of Opium if he promises to end the opium empire and open the border to Aztlan.

Matt spends the first six years of his life living isolated from everyone at Celia's house in the middle of the poppy fields.

The poppy fields surround Celia's house and the Big House. They produce Opium's only crop, opium, which is harvested by eejits.

More summaries and resources for teaching or studying The House of the Scorpion.

The House of the Scorpion from BookRags. (c)2022 BookRags, Inc. All rights reserved.