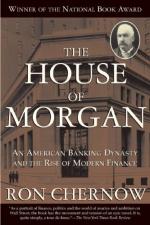 Ron Chernow
This Study Guide consists of approximately 54 pages of chapter summaries, quotes, character analysis, themes, and more - everything you need to sharpen your knowledge of The House of Morgan.

The House of Morgan Summary & Study Guide includes comprehensive information and analysis to help you understand the book. This study guide contains the following sections:

This detailed literature summary also contains Topics for Discussion and a Free Quiz on The House of Morgan by Ron Chernow.

The House of Morgan by Ron Chernow is a well-written and very interesting history of the Morgan banking dynasty. It explains how George Peabody opens the company called George Peabody and Company and, since he has no heirs, brings in Junius Morgan as a partner in 1854. When Peabody retires, Morgan has the business but cannot use the Peabody name. Morgan is upset because Peabody is a well-respected name in the banking world. Junius renames the business J.S. Morgan and Company. This is the bank that becomes the House of Morgan, an international banking empire.

Chernow tells the history of the House of Morgan, basically the history of the financial world. The House of Morgan is the banker for royalty and nations, including the Vatican. For many years, they are more powerful than most governments who, up until the time of World War II have to rely on private bankers to finance their wars. Chernow relates how J.P. Morgan would intervene to keep the stock market open or to negotiate deals in different countries to supply gold to keep the world currency markets open and the pound and dollar stable. In the days before a central bank or the Federal Reserve System, the House of Morgan fulfilled many of the roles of a central bank arranging for money for governments' use. The House of Morgan is a major financier of World War I. In the post-war period, the German reparations to the Allies are used by the Allies to pay their war debts. This causes problems up until the outbreak of World War II. Morgan personnel function as financiers to Japan and to Mussolini.

The Morgan role in the Latin American debt crises is told in detail from the initial loans through the repudiation and write-off of the debt on the advice of President George W. Bush. The Morgans are always able to put together syndicates to raise loans for important parties. The outbreak of World War II brings about changes since the banks can no longer muster the resources needed to finance wars. The Morgans still function as intermediaries for governments.

Chernow follows the path of the major Morgan operations. There is J.P. Morgan and Company in New York which splits into the Morgan Bank and Morgan Stanley when the Glass-Steagall Act is enacted. Morgan Bank eventually merges with Guaranty Trust to become Morgan Guaranty. The London office is known as Morgan Grenfell. Their operations change as the world changes. The big trusts form and then dissolve during the days of trust-busting. What begins as a merchant bank eventually becomes active in mergers and acquisitions, including hostile takeovers and corporate raids with junk bonds. The different branches never reunite after the break-up caused by Glass-Steagall. They basically become competitors with one another as they expand into different operations in different countries as Chernow reveals one hundred fifty years of Morgan history.

More summaries and resources for teaching or studying The House of Morgan.

The House of Morgan from BookRags. (c)2022 BookRags, Inc. All rights reserved.