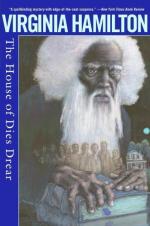 Virginia Hamilton
This Study Guide consists of approximately 23 pages of chapter summaries, quotes, character analysis, themes, and more - everything you need to sharpen your knowledge of The House of Dies Drear.

The House of Dies Drear Summary & Study Guide includes comprehensive information and analysis to help you understand the book. This study guide contains the following sections:

This detailed literature summary also contains Topics for Discussion and a Free Quiz on The House of Dies Drear by Virginia Hamilton.

The House of Dies Drear is a novel by award winning author Virginia Hamilton. Thomas Small is saddened to leave his hometown for the new house in Ohio, but he is excited about the history that surrounds the new house. The house Thomas and his family are to live in was once an important stop on the infamous Underground Railroad before the Civil War. However, the house is rumored to be haunted, a fact that seems to be illustrated the first night the family sleeps there and wakes to find odd triangles wedged into the door frames of the bedrooms. Now Thomas has a mystery to solve and only a short period of time in which to do it. The House of Dies Drear is a haunted house story that is not only filled with suspense, but with a history that will keep the reader fascinated long after the final sentence.

Thomas Small and his family are leaving their home in North Carolina to live in a new house in Ohio. Thomas' father, Mr. Small, is a history professor who has always been fascinated by the Underground Railroad that smuggled slaves to the North and Canada before the Civil War. The house the Small family is to live in in Ohio was once an important stop on the Underground Railroad. Thomas is just as excited as his father to explore the many hidden tunnels that are suspected to run under and through the house.

Thomas and his family arrive at the house of Dies Drear and discover it to be somewhat frightening in the way it sits nestled against an imposing cliff. Thomas immediately begins to explore the house and discovers a tunnel that opens with a push of a button under the front porch steps. Thomas explores the tunnel, but becomes frightened when he loses his light and begins to hear a strange breathing sound in the dark. Thomas screams for help and is shocked when a wall suddenly opens, exposing the kitchen of his new home and his family settling down to dinner. Thomas' father removes the mechanism that allows the porch steps to open and the kitchen wall to slide so that Thomas cannot explore the tunnels without an escort.

The first night in the new house Thomas vows to remain awake so that he might see the ghosts of Dies Drear and two slaves that are rumored to haunt the house. Thomas settles in the parlor, but quickly falls into a deep sleep, waking late in the morning with only a short time to prepare for church. As Thomas dresses, he becomes aware of some mystery that has grabbed his father's attention. Someone or something came into the house in the middle of the night and left three triangles wedged into the frames of the three bedrooms where the Small family slept. Thomas' father studies the triangles and discovers that together they form a Greek Cross. Thomas' father believes these crosses are some kind of warning to the family to leave the house of Dies Drear.

The Small family goes to church and discovers a wariness in the community not only toward them, but toward the caretaker of the house, Mr. Pluto, as well. Thomas expects the community to welcome them and come to the house to visit, but they do not. Instead, the Small family goes for a drive through their new town and stops at the college for lunch. When they return home, they discover that someone has broken into the house and destroyed the kitchen. Mr. Small marches off to accuse Mr. Pluto of the vandalism, but discovers that Mr. Pluto has been protecting the property for years against the Darrow family, a local family who are convinced that Dies Drear left behind a great treasure and it should belong to the Darrows.

Mr. Small and Thomas plot with Mr. Pluto and his son, Mayhew, to scare away the Darrows. They lay in wait in theatrical makeup and frighten the Darrows, wounding their pride, and convincing them to leave Mr. Pluto alone. Afterward, Mr. Pluto agrees to allow Mr. Small to catalogue the impressive treasure collection Dies Drear left behind after his death.

More summaries and resources for teaching or studying The House of Dies Drear.

The House of Dies Drear from BookRags. (c)2022 BookRags, Inc. All rights reserved.