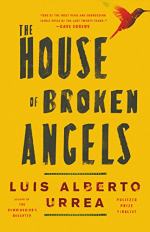 Luis Alberto Urrea
This Study Guide consists of approximately 41 pages of chapter summaries, quotes, character analysis, themes, and more - everything you need to sharpen your knowledge of The House of Broken Angels.

The House of Broken Angels Summary & Study Guide includes comprehensive information and analysis to help you understand the book. This study guide contains the following sections:

This detailed literature summary also contains Quotes and a Free Quiz on The House of Broken Angels by Luis Alberto Urrea.

The following version of this book was used to create this study guide: Urrea, Luis Alberto. The House of Broken Angels. Little Brown and Company, 2018.

The House of Broken Angels, a novel by Luis Alberto Urrea, is broken into five sections. The first section, Delirious Funerals, opens with Miguel “Big Angel” de la Cruz late in arriving to his mother’s funeral. Big Angel, who turns 70 years old the following day, is dying of bone cancer. He has arranged to throw his birthday party the day after the funeral service for his mother, Mamá América. Big Angel and his wife Perla moved to San Diego from Tijuana, after illegally crossing the border.

Meanwhile, Gabriel “Little Angel” de la Cruz, Big Angel’s much younger half-brother, also arrives in San Diego. Big Angel’s daughter Minnie and his wife Perla help him into his wheelchair and out the door. Big Angel’s son, Lalo, is also present at the funeral. Lalo remembers his brother Braulio, who was killed nearly ten years ago in a neighborhood shooting, joining the U.S. army. Little Angel and Minnie discuss one of Perla’s sons, Yndio, who identifies as queer and is absent from the funeral service.

On the night before the party, Big Angel tries to recount the story of the second time that he met Perla. In the second section. Then (En Aquel Entonces), the narrative shifts to the first meeting between Big Angel and Perla. Perla was involved in a car accident in their hometown of La Paz, Mexico. Big Angel, who has accompanied his father to the police station where Don Antonio works as a police officer, meets her there in the station. They begin spending every day together and, after Big Angel’s brief stint as an assistant on a fisherman’s boat, reunite in Tijuana. By this time, Perla already has two children from a previous relationship: Yndio, the oldest, and Braulio. Eventually, Big Angel buys the family a house in San Diego and they cross illegally into the U.S.

In the third part, Celebration Day, the day of Big Angel’s party arrives. Little Angel makes two trips to Target to order and buy the cake, first with La Gloriosa and later with César. Ookie, a neighborhood boy, shows Little Angel the Lego reconstruction of the city of San Diego that he has been building, with Big Angel’s help. Meanwhile, Lalo and his son Giovanni get high together and plan to confront a gangster. Though their plan is to kill him, Lalo cannot go through with it and they flee.

In the chapter, “The Confessions,” Little Angel and Big Angel both confront one another with their failings. Big Angel tells Little Angel that he was conceived out of wedlock. Little Angel tells Big Angel about the time he refused to come pick him and his mother up for Christmas, despite having promised to do so. Big Angel, mortified, apologizes for his behavior. Big Angel tells the story of Yndio’s flamboyant and defiant performance as Cher in a drag nightclub; Big Angel believes his father, Don Antonio, died out of shock They laugh and bond over the story of Mamá América trying to smuggle a parrot into the U.S. in her brassiere.

In the final chapter of the third section, the gangster that Lalo does not kill in the earlier chapter arrives at the de la Cruz home, planning to kill Lalo. Yndio, seeing the gunman arrive, leaves his car and enters the home, where he disarms the gunman. He accepts Big Angel as his father and joins the family in Big Angel’s bed. In the final section, The Coda, Big Angel flatlines at the hospital, surrounded by family. Then the narrative shifts to the last events on the night of the birthday party, when Little Angel and La Gloriosa have sex. Perla and Big Angel reminisce about their life together and Little Angel promises to take Big Angel to see the ocean tomorrow, where they will watch “great waves traveling forever across the open copper sea” (321).

More summaries and resources for teaching or studying The House of Broken Angels.

The House of Broken Angels from BookRags. (c)2022 BookRags, Inc. All rights reserved.