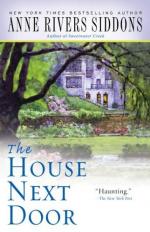 Anne Rivers Siddons
This Study Guide consists of approximately 47 pages of chapter summaries, quotes, character analysis, themes, and more - everything you need to sharpen your knowledge of The House Next Door.

The House Next Door Summary & Study Guide includes comprehensive information and analysis to help you understand the book. This study guide contains the following sections:

This detailed literature summary also contains Topics for Discussion and a Free Quiz on The House Next Door by Anne Rivers Siddons.

The House Next Door tells the story of an allegedly haunted, or possessed, house that plays upon the weakness of the people who live in or even visit the home. Before the house is destroyed by well-meaning neighbors Colquitt and Walter Kennedy, it is the setting of a terrible accident that results in a miscarriage, the complete breakdown of an emotionally unstable woman and the murder-suicide of an entire family. Although others believe the occurrences in the house are merely the result of bad luck, the Kennedys trace the home's bad nature back to Kim Dougherty, the architect who built the house. In the final chapter of the book the Kennedys have murdered Kim and prepare to burn down the house.

The first family to live in the haunted house is first devastated by a miscarriage. The family is then torn apart when the husband is discovered in a homosexual embrace. The second family who lives in the house has no better luck. The already emotionally delicate Anita Sheehan is forced to lose touch with reality once and for all when she witnesses her husband having sex with their next door neighbor. The lives of the third family who live in the house are ended in a murder-suicide. Meanwhile, next door neighbors Walter and Colquitt Kennedy feel as if the house is trying to tear them apart. However, the two bind together in an attempt to destroy the house and keep it from devastating any more lives.

Although this book is disturbing and its ending unsatisfying, it is enjoyable and engrossing on the whole. The book is intended as a horror story in which the unwitting Kennedys become the pawn of a haunted house. Although they sacrifice their lives to save others from being destroyed by this house, they also allow themselves to be used by the house to spread its destruction. The ending of the book indicates that since the plans for Kim's house still exist, the Kennedys' sacrifice was meaningless.

More summaries and resources for teaching or studying The House Next Door.

The House Next Door from BookRags. (c)2022 BookRags, Inc. All rights reserved.