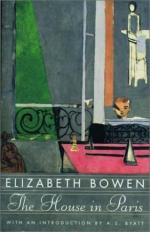 Elizabeth Bowen
This Study Guide consists of approximately 47 pages of chapter summaries, quotes, character analysis, themes, and more - everything you need to sharpen your knowledge of The House in Paris.

The House in Paris Summary & Study Guide includes comprehensive information and analysis to help you understand the book. This study guide contains the following sections:

This detailed literature summary also contains Topics for Discussion and a Free Quiz on The House in Paris by Elizabeth Bowen.

This novel from the 1930's follows two interrelated narrative lines. The first, set in the present, explores the experiences and perceptions of a young girl, Henrietta, on a temporary stopover at the home of friends of her family in Paris. The second, set in the past, tells the story of the mother of a young boy Henrietta encounters at the house in Paris. In both narratives, the book explores themes relating to the importance of living a life of emotional freedom, the nature and power of motherhood, and the tension between appearances and reality.

The action of the novel begins with a narration of the arrival of Henrietta in Paris, a stop on her way to visit her grandmother in the south of France. Narration describes how Henrietta, primed with stories of Paris' excitement and liveliness, had been looking forward to her visit but is disappointed by the general lack of excitement in both her traveling companion (the reserved, almost stern, Miss Fisher) and in the city itself.

When Miss Fisher warns Henrietta to be careful around the sensitive, troubled boy (Leopold) who is also going to be at the house. Henrietta tells Miss Fisher that she (Henrietta) knows how to behave. Later, however, Henrietta asks Leopold the sort of questions about his history that Miss Fisher specifically warned her not to ask, but after an initial flare-up of confrontation and resentment, the two begin to become friends. They're interrupted first by Henrietta being summoned to meet Miss Fisher's domineering mother (Madame Fisher), and then by a telegram announcing that Leopold's mother, whose visit to see Leopold had been much anticipated, is not going to be coming after all.

The next, and most lengthy, section of the novel tells the story of Leopold's mother, Karen Michaelis. Engaged to marry the reserved Ray Forrestier, Karen struggles against her growing passion for the moody Max, engaged to Karen's best friend Naomi (the Miss Fisher of Part 1). Eventually, Karen's struggles fail, and she and Max have an affair (an affair that resulted, according to comments made by Madame Fisher in Part 1, in Naomi's heart being broken). Narration describes how, as the result of the affair, Karen becomes pregnant with Leopold, but realizes she would not be a good mother to him. Naomi, suppressing her pain beneath an appearance of concern for her friend and her former beloved, makes arrangements for Leopold to be adopted. Meanwhile, the emotionally volatile Max is confronted by the angry, manipulative Madame Fisher, and kills himself.

Back in the present, Leopold, Henrietta and Miss (Naomi) Fisher are excited to learn that the house is to have a visitor after all - Ray Forrestier who, as it turns out, married Karen after Max's death. Narration describes how Leopold's existence has always been a point of tension in Ray and Karen's marriage, how the troubled Karen decided at the last minute to not follow through on her plans to visit, and how Ray came in her place without her knowing, determined to help her regain mental balance by establishing a relationship with her child. Ray convinces the reluctant Miss Fisher to let Leopold travel with him, and Leopold rejoices in finally coming face to face with his mother.

When it's time for Ray and Leopold to catch their train, Miss Fisher realizes it's time for Henrietta to catch her train as well. Ray accompanies Henrietta to the train station, where she is handed over to the unfamiliar chaperon assigned to accompany her on the next stage of her journey. After waving goodbye to her, Ray and Leopold go outside the train station to wait for their train, both looking out at a now lively Paris ... and into a now lively future full of tenuous but compelling hope.

More summaries and resources for teaching or studying The House in Paris.

The House in Paris from BookRags. (c)2022 BookRags, Inc. All rights reserved.