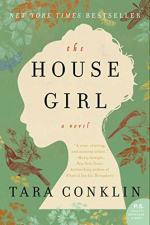 Tara Conklin
This Study Guide consists of approximately 57 pages of chapter summaries, quotes, character analysis, themes, and more - everything you need to sharpen your knowledge of The House Girl.

This detailed literature summary also contains Quotes and a Free Quiz on The House Girl by Tara Conklin.

Carolina Sparrow, known to her friends as Lina, is an intelligent young attorney who may very well be on the fast track for a partnership at one of New York's top law firms. She is working hard with little time for herself, intent only on the next case, when one of the partners, Dan Oliphant, announces that he wants to put her on a top priority case for one of the firm's important clients, Ron Dresser. Accustomed to corporate law, Lina is surprised to learn that she is going to be working on a reparations case. The client, Mr. Ron Dresser, wants to bring a class action law suit against the United States government and several industries – including the tobacco industry – for harm done to the slaves held by Americans prior to the 1860s. Lina's role is to find a descendant of a slave who will represent the class action suit.

Lina's father, Oscar, is an artist. When she tells him about the new case, he puts her onto the story of a recent controversy in the art community. A young slave named Josephine might have been the artist behind some of the paintings attributed to a slave owner, Lu Anne Bell. The Bell paintings are worth a great deal of money but an art critic named Porter Scales has recently questioned whether Lu Anne painted all of them. He believes Lu Anne's slave girl, Josephine, might have painted some of them.

Lina believes that Josephine's descendants would make a good “face” for a class action lawsuit. She sells Ron and Dan on the idea and travels to Virginia to do more research into Josephine Bell, hoping to find at lead to her descendants. Lina finds her way to the Bell Center for Women and Art, and meets a woman named Nora Lewis. Nora oversees the research center and seems very helpful. The Stanmore Foundation owns the Bell paintings and, with the recent controversy around the collection, sets out to hide or destroy any information about Josephine and the possibility that she could be the artist. Lina finds evidence that Josephine had a son, but fails to find any information about his fate. She is leaving in despair when Nora gives her a letter, written by a man named Caleb T. Harper. Nora says she will lose her job over the revelation, but believes it is time for the truth.

The letter is very old and Lina has to wait until she gets home to read it. Caleb T. Harper was the white doctor who helped Josephine escape. They made it to Philadelphia but Josephine committed suicide, fearing she was about to be recaptured. She left instructions for Caleb to find her son, Joseph, and to buy his freedom. Caleb did that and Joseph grew up to have children of his own. Lina had, completely by chance, met one of those descendants, Jasper Battle. With all this research in hand, Lina returned to her law firm where she discovered Ron Dresser had decided to drop the case after all.

During her research, Lina had struggled with her personal life. Her father had a successful art show featuring paintings of Lina's mother Grace. Lina grew up believing that Grace died in a car wreck but Oscar revealed that Grace had simply decided to leave. Grace asked Oscar to tell Lina she was dead, believing that preferable to having her daughter feel abandoned. Oscar reveals that to Lina, along with a phone number from Grace, who had decided she wanted to talk to Lina.

With the lawsuit a dead issue, Lina realizes that she has to make some decisions about her life. She quits her job and hands her research over to Jasper in the event that he and his family want to assert their claim to Josephine's paintings. She gives Porter Scales a copy to verify his claims about Josephine's work. She also begins a relationship with Jasper, free from the lawsuit and with plans to get in touch with her mother.

More summaries and resources for teaching or studying The House Girl.