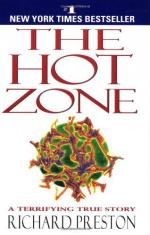 Richard Preston
This Study Guide consists of approximately 41 pages of chapter summaries, quotes, character analysis, themes, and more - everything you need to sharpen your knowledge of The Hot Zone.

This detailed literature summary also contains Topics for Discussion and a Free Quiz on The Hot Zone by Richard Preston.

The Hot Zone, a true story that took place in the late 1980's, is based upon an outbreak of the Ebola virus in a monkey house located in the Washington, D.C. suburb of Reston, Virginia. The author weaves together the tales of several previous outbreaks in Africa to describe clearly the potential damage such an outbreak could cause. The first appearance of an Ebola-like virus takes place in Kenya and costs the life of a French expatriate named Charles Monet. His bloody, painful death is re-told in graphic and terrifying terms. Hospital personnel treating Monet become ill as well, demonstrating the extreme danger of exposure to this disease. Throughout the first half of the book, several outbreaks and deaths are described.

One of the U.S. Army personnel who is called upon when the Reston outbreak occurs is Major Nancy Jaax. Jaax is a mother and an Army veterinarian who works with the most lethal viruses and other dangerous agents in full-body "space suits" within laboratories known as "Hot Zones." Nancy Jaax struggles to keep a balance between her job and her family life, but the job usually takes priority. Her husband, Jerry Jaax, also works in the Army's Veterinary Corps, and he is uncomfortable with his wife's being at such a high risk of exposure to deadly agents at Fort Detrick, Maryland.

The monkeys at a research facility in Reston, Virginia, begin to fall ill, and after some time, the head veterinarian sends tissue samples to Nancy Jaax's colleagues. They determine the illness is a strain of Ebola. The military, along with the Centers for Disease Control (CDC), takes on the task of entering the monkey house and destroying the animals in an attempt to keep the virus from jumping into the human population and causing a potentially worldwide crisis. The entire facility must be treated as a Hot Zone, and hundreds of monkeys are killed. Scares abound throughout the procedure: one woman's ventilated suit runs out of battery power, a monkey thought to be unconscious wakes up on the operating table while it is being euthanized and tries to bite a soldier, and tears occur in various members' space suits. Eventually, the entire building is decontaminated, and the personnel return to their regular lives.

Some of the people who were infected first in the story were visiting a site in Kenya called Kitum Cave. A U.S. scientific expedition goes there in hopes of finding the origins of these viruses. Unfortunately for the U.S. scientists and military, the mission is unsuccessful, but the doctor who put the expedition together was able to stow the equipment used when the cave was treated as a Hot Zone. This experience and equipment made the eventual decontamination project at Reston possible. The story ends with the book's author visiting Kitum Cave to explore the place that is still suspected to be home to Ebola's host. Through all his research and writing on the book, he has learned how to keep himself as safe as possible during his explorations. Rather than searching for the actual origin of the virus, however, he is searching for the origin of the story.

More summaries and resources for teaching or studying The Hot Zone.